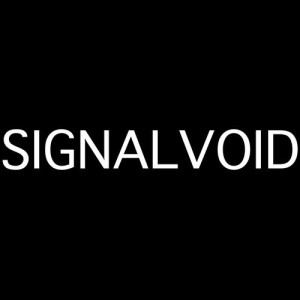 Like the Explicit Content stickers on an old CD, SIGNALVOID should probably carry a warning label, and seeing as we are in the 21st century, possibly a health warning to go with it.

One minute can seem like a very long time. It’s a seismic shock that SIGNALVOID shakes into your very system from the outset. SIGNALVOID is a 263 minute noise compilation, and it’s a musical leviathan that has only just recently been excavated; a creature with scaly features that resembles something familiar, perhaps of reptilian descent, but is ultimately not of this world. Over 100 artists were asked to contextualize their own notions of how they perceived noise music, creating up to three tracks each, all of one minute in length. The only rule was for there to be an absence of silence at the beginning and ending of each track. A colossal response followed.

Created by ATTN:Magazine’s Jack Chuter, formerly a writer at The Silent Ballet, SIGNALVOID is four hours and twenty-three minutes long, full of devastating decibels unleashed in a nirvana of noise. Contributing to the compilation are artists such as My Cat Is An Alien, Nadja, Sun Hammer and Jack Chuter himself, but the lesser known artists really take hold of the raw electrical current, lighting a spark in the dark of the deep void. Really, to name every single contributor might just crash our site – a high possibility – sending out short circuited signals of noise to unintended destinations. This is either going to be a really long review, or a really short one. All systems go!

Distorted, dizzying storms of dust try to outrun a dark storm of annihilation. There’s no escape. As the seconds tick down, the music becomes restricted, fighting against the clock and an incoming panic attack, but this countdown also helps to energize the record. Not knowing what is waiting for us next keeps the whole collection incredibly dynamic. The television static in the dead of night, volume turned up to 11, may be cut in a blaze of rocket boosters blasting out fires of ash and jets of steam. A signal of static tries to claw its way in from the emotionless void; deep space and cold dimensions. Voices shriek way beyond sanity, and then take a sinister turn as wild animals escape. Previously caged, they’re now on the rampage. Even the dreaded dentist’s drill makes an appearance (this track feels much longer than a minute.)

SIGNALVOID is a frightening, exhilirating experience (just the way we like it.) This may be the kind of noise one would expect, but it may be a surprise to find a clean, quite beautiful guitar melody levitating calmly (Maurizio Opalio – “Air Around The Strings”.) These are the shards of faint light that flicker from our world into the void, harmony building a bridge over the chasms of noise. Normality is resumed as a jungle full of demented baboons comes into sight, heading for our direction. Let’s face it, when there’s an artist named Shitloads of Fuck All (this is brutal), and titles such as Ass Blast and Honey I Stabbed The Kids, we can be sure of a pretty interesting, if not disturbing listen. Welcome to no man’s land; the colourless border where we are invited to cross the streams between harmony and dissonance, into the rift and beyond the seismic void. A border of vandalised frequencies and the scorched skeletons of those who have not made it, scattered around and drained of all life without mercy; victims of the static, led by violent vampires that thrive in the space beyond slumber.

Reality evaporates in a thin vapour trail – say goodbye to sanity. SIGNALVOID is stimulating music that destroys our preconceptions of what we consider music to be. It may be the case that rhythm, melody and harmony remain inside the distorted frequencies; smothered, but still alive. Noise is everything and everywhere. Sure, some may say ‘turn it down!‘, but noise isn’t always a faltering stream of discordance (Star Turbine – “Electricity”.) The faintest rhythms are still there; they’re just phantoms. Besides, what exactly is dissonance but a spoken word and the expectation to shy away from the thought and the music? Essentially, all music is noise.

“Antiwar” is either a carnival atmosphere, bombarded with bass heavy cell phone footage, or a screaming protest mixed with latin rhythms. This is the chaotic noise on the street, sent directly to us via television. Rebounding all of the time, from track to transitional track, the noise is always interesting and thought provoking.

A future alien invasion could be imagined, as the grey, pointed faces and bulging black eyes press faintly through the portholes of a UFO (Spaceships Over Deeside), and the flashing strobes of light coupled with a frenzied alarm rings out as if we are on board the invaded Nostromo. Space Invader style bleeps fizz out of a surreal amusement arcade, while on the other side of the void a lurking terror crawls through a rattling sewer pipe. Do you remember that old, boarded-up house covered with leaves at the end of the street? The one that no-one walked past. The door is now open.

Is music noise? / All music is noise.

Living on the brink and waiting to see (or hear) where we will be taken next is a treasured pleasure. And taken is exactly what happens, as the music grabs us and flings us into the void. SIGNALVOID is an immense monstrosity of noise. What this compilation has also highlighted is the complete, wide ranging rainbow of ‘noise’, and also of what it constitutes. For many, noise as music represents complete finality; the final strain, the nuclear flip out caused by a life-destroying crisis. As such, it can be a sound of fear, and not of truth, concealing what noise really is. We fear that which we do not understand, but noise shouldn’t be one of life’s mysteries. It’s all around us. Music such as this lives on the edge, thoroughly destroying anything that may want to fight it. It’s pretty much four hours of deranged skullfuckery, which is why it’s an amazing listen. Don’t let either the concept or the running length put you off; SIGNALVOID is a classic in the making. Try it for yourself – it’s available as a free download, as well as that blue link under your eyes.

For the optimal experience, listeners are asked to put the album on a selected audio player and press shuffle…the real high comes from the fact that no experience will ever be repeated. After it is over, it may be a good idea to prescribe some light dream pop for a couple of hours. Just when you thought it was safe.