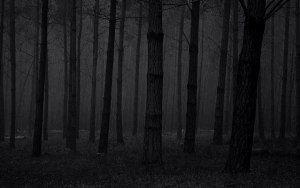 The author of this mix, Zachary Corsa, should be familiar to our regular readers. He played in the drone group Lost Trail with his wife Denny, and solo as the ambient-folk project Pines. He ran Wood Thrush Tapes and writes for ACL, as one of our founding members, as well as for other publications.  He has previously produced two mixes in this series, Snowy Mix For Synesthetic Commuters  and Raining Light, and he and I co-curated the Todtnauberg compilation. He and Denny recently relocated to Memphis from their long-time home of North Carolina, and thus rechristened Lost Trail as Nonconnah to mark this new phase in their lives. They’ve slowed the pace of releases relative to their prolific output as Lost Trail, but have still released one full-length and a couple of EPs in the last year.  Nonconnah been working on an ambitious double album project with a number of collaborators, to be released sometime in 2018.

Over the holidays Zach began posting earnest Facebook updates proclaiming his continued appreciation for Witch House.  While I was familiar with SALEM and Holy Other (partially through this Tim Hecker remix) I can’t say I am particularly well-versed in the genre.  In my mental notes I filed it between PBR&B’s white kid  take on hip-hop and other internet-spawned micro-genres like Vaporwave. Yet as Zach’s mix demonstrates, the genre is still alive and well, and its hybrid sounds continue to surprise.  We’ll leave it up to you to decide if it lives up to the hype. (Joseph Sannicandro)

As music writers and artists ourselves, perhaps we have an especially strange relationship to labels.  We use them but we’re also probably more jaded than your average reader might be. Micro-genres and internet-trend/joke scenes cycle in and out as part of the clickbait attention economy. That said, as this mix demonstrates, there’s actually something interesting going on here. so, what attracted you to ‘witch house’?

As far as what attracted me to witch house, I think once you look past the internet-generated hype of it, you’ll find there’s some really innovative genre-splicing involved, which is something that always hooks me. This strange mix of hip-hop and electronic music, with spooky themes, is bizarre and shouldn’t work on paper but works wonderfully with the best examples of the sub-genre. It may not be in its heyday anymore, but you can see its influence in a lot of modern, dark hip-hop and electronic production. Anything that crosses genre lines in a new and interesting way can never completely die, and it’s nice to see a lot of producers still working in witch-house’s general outline all these years later. And it’s just fun music, fantastic for driving, and I’m an absolute dork for anything spooky-vibed at all, which should surprise no one who knows our music a little.