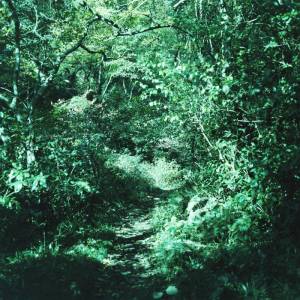 In Japan, the leaves are falling, but Down Under, spring has just begun.  We recommend kotonoha to our Aussie friends, as the timbre fits.  ironoma extends the season with lush green imagery and lovely jade vinyl, calling the album a “Japanese midsummer saunter through deep emerald green forests and tranquil fields.”  But whatever season one is living in, kotonoha (a blended word meaning leaves and plucked string instruments) plunges listeners into a peaceful climate, away from traffic and politics and the restless pace of urban life.  When one cannot be forest bathing and must make do with “office bathing,” this is the perfect soundtrack.  The Japanese term for the sub-genre: kankyo ongaku (環境音楽), or “environmental music.”

iromoma begins with pointillist piano notes, decorating the deck of “shioribi.”  The effect is like placing stones in a Zen garden or counting droplets of rain in a puddle.  This is a beautiful way to ease in to the calming album.  Other minimalist compositions await, but not all is placid.  “波空” (“wave sky”) if you trust Google translate) is a particularly active piece that defies the stated description of songs that “rarely build.”  This one blossoms with cascades of notes, building to something resembling a refrain, a descending series of repeated notes balanced by single, louder hits in the higher register.  And look, on the back ~ there it is, the “wave sky.”  One can lose one’s self in the image, imagining sparkling sunbeams reflecting from the scales of leaping fish. 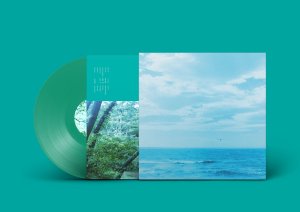 Guitar also features in some of the tracks, most notably “tsukishirubi” (which we trust means “lunar”).  The moon follows us everywhere, but we tend to forget it until we are startled by its full appearance.  Dancing among the trees, it finally rises above the foliage and architecture to rule the night sky, providing inspiration for poets and playwrights.

After a series of drifting, dreaming pieces, ironomi closes with the album’s most direct track, “maigo,” the title implying youth and dancing.  Instead of patterns, we hear melodies; instead of impression, intention.  The effect is bittersweet, like admitting the tea break is over, collecting one’s thoughts, and returning with added, wistful focus.  Even as we say goodbye to our own seasons, we can be reassured by the fact that they begin in one part of the world as they end in another.  If we cannot travel to the green by plane or car, we can visit the forest in our minds.  If we close our eyes, we can imagine the scent of the loam or the salt of the sea.  kotonoma helps us to reach beyond what we see to what we know, but all too often forget.  (Richard Allen)