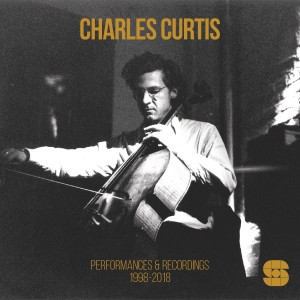 When does a musician become a master of their instrument? Once an apprentice knows complex pieces by heart, they probably feel mastery. More so when they gain an intimate knowledge of their instrument’s repertoire. But the best musicians reach a point where each performance is an act of not knowing – of discovering what comes next. As this triple-disc retrospective shows, cellist Charles Curtis has been operating at that level for at least twenty years. Clocking in at two hours and seventeen minutes, the collection is a snapshot of variety and restlessness.

The first disc, which is a solo affair, is a case in point. It sandwiches eight pieces of early music between two modern compositions. Moving from Guillaume de Machaut through to Tobias Hume, Curtis offers enjoyable renderings of viola and viol music from the medieval and Renaissance. But it is the modern idiom he speaks most fluently. The opening track, Éliane Radigue’s “Occam V”, is a showstopper. Across seventeen minutes, Curtis works in rich droning layers broken by movements of the bow. Deep tones multiply in a feedback loop, the vibrating strings mimicking the billowing of a didgeridoo. Where the bowing increases in speed or the pitch rises, Curtis injects intensity into an understated soundscape.

Disc two centres on some modernist heavy hitters: from Webern to Messiaen, and from Feldman to Terry Jennings and Alison Knowles. Most of these tracks are for piano and cello, including Jennings’ “Song”. This sees Curtis mustering great lyricism and pathos. As La Monte Young explains in a liner note, the cello stands in for the missing vocal component. We are on different territory with Webern’s “Drei Kleine Stücke, op. 11” (for cello/piano) and “Movement for String Trio”. Here, traversing atonalism and nonrepetition requires another set of skills once again.

It is the Knowles track in which Curtis’s explorations are fully brought to bear. As its title suggest, the piece was composed in “Rice and Beans for Charles Curtis” – that is, on a rice paper scroll indented with legumes and other objects. Interpreting this unconventional notation, Curtis begins in rhythmic, insistent tapping on the wooden body of the cello. Even where plucked and struck strings come into play, the piece seems a total re-navigation of the instrument, approached as an alien object.

Disc three consists mainly of the cellist’s own compositions. It is difficult to discern a consistent approach. “Music for Awhile” shows Curtis in a rock setting, where he abandons the cello for guitar and organ, joined by a bassist and drummer. For me, this meandering and somnolent prog was a low point. However, a track like “Unison Offset” shows the cellist’s ability to square up to his minimalist peers and forebears. Its mesmerising repetitiveness conjures humming swarms of bees in the listener’s skull. Evidently, busy industry and unpredictable flight are qualities they share with their creator. (Samuel Rogers)