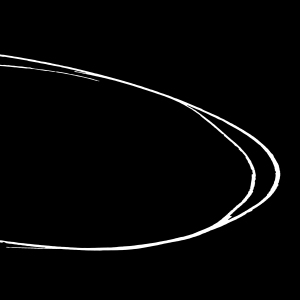 This is a time of collective anxiety. This is a time of rejecting collective discernment. Death tallies ever rising beget social media scaremongering begets store shelves emptying. This is a time that needs discernment now more than ever, from those scurrying through both the aisles of supermarkets and the corridors of power. What a tragically timely release then, for music borne of researching the disorder of anxiety.

Leipzig-based composer and sound designer Philipp Rumsch returns to our pages with his 12-person ensemble with a markedly different LP to 2018’s Reflections ~ one no less impressive but that demands and indeed rewards a little more listener effort. This is apparent even from that obtuse title, suggesting a fusion of creative work and research project. In this case, it’s entirely apt. The subject? Anxiety. The scope? The collective, not the individual. Anxiety disorder could be considered a deeply personal type of illness, stemming from innately individual circumstances. But here, based on his own observations and interviews, Rumsch zooms out to consider it as universal. Those interviews find themselves woven through the fabric of this record in both musical and literal senses.

“As if everything is freezing, but only in the stomach”

For µ: of Anxiety x Discernment is a heavily vocal album. Unique voices decorate most of the 10 tracks, which Rumsch describes as two ‘mirror-inverted pieces’, from the heavily processed to the unadorned. “a4” presents clipped observations from a handful of individuals, their voices disguised and often obscured by brass jabs and electronic glitches ~ a wholly unsettling choir of corruption that’s like something from World’s End Girlfriend’s more nihilistic moments. In contrast, its mirror piece “d4” makes the glitch part of a hypnotic rhythm, interlinked with a calming arpeggiated synth line and melodic vocal part that starts pure before becoming processed. For almost 4 minutes in “d5”, we hear a hesitant, stilted soliloquy from a man frequently pausing for jagged breath. He speaks in non-sequiturs and trips over words; thus, although instrumentation is barely there, what this voice conveys is feeling over meaning ~ tension, dislocation. A spacious piano in time replaces this voice but the mood persists, errant glitches and percussive intrusions only heightening the tension established.

Rumsch adopted an abstract ‘mirror’ structure to allow light to reflect off these pieces at different angles, illuminating the same core in both unsettling and enchanting ways. And so, the mirror piece to “d5” (“a5”) is a vocaloid a cappella song that truly enchants ~ the emotional core of the set. The female singer’s words may be just as tricky to discern through the crackling layers of harmony, but the occasional clear phrasing and condensed-pop-song structure of the melody create a sense of the sanguine. In the musical sense, the throughline connecting the mirrored pairs is often obtuse to the point of appearing obfuscated, but at the visceral level, the mirror structure of the record successfully tugs us in often contrary directions.

The best of the pairs are the midpoints of each side. In these two tracks is the jazz that flowed so effortlessly through much of Reflections deployed most prominently in this more musically minimal outing. The jazz grooves and atmospheric electronica of the enthralling “a3” make it the clear ‘single’ of the set, lying somewhere between mid-era Radiohead and Jaga Jazzist, while the monotonous piano stabs of the Reich-esque “d3” tighten the sinews of every muscle for over six minutes before an unexpected full-band release ~ the set’s crescendo.

µ: of Anxiety x Discernment is a mixtape of opposing emotional forces and musical passages both abstract, fluid and improvised as well as tightly constructed and highly melodic. It tightens the muscles and softens the heart equally, and that these reactions happen across the A and B (or in this case, “a” and “d”) sides of the set means that the record never feels disjointed. Indeed, each pair of five tracks feels almost through-composed, flowing with a grace that I found surprisingly moving as the disembodied, distorted voices disclosing internal conflict and minor triumphs swirl around in the aether. Rumsch may have aimed to discern the threads that connect all sufferers of this insidious disorder, but as the final phrase of “d1” repeats in whispers to close the set, what he communicates is something that feels hopeful and personal: confidence is formed. (Chris Redfearn-Murray)