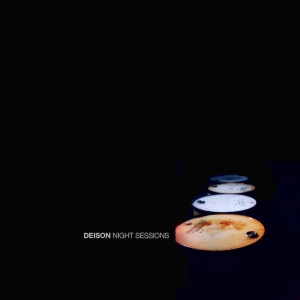 Age can have a calming effect on the soul.  Just ask Deison, two decades removed from his work in Meathead.  While remaining experimental, he has toned down the knobs a bit for his latest effort, the collaborative and cavernous Night Sessions.

The album’s guest starts (including Scanner, Philippe Petit and Under the Snow) provide the album with a variety of interesting sounds: feedback, dripping, children’s cries.  The advantage is that the listening experience is seldom stale; the disadvantage is a lack of continuity.  Night Sessions ventures into ambient dub (“Sleepless Train”), glitch (“No Suggestions”), Middle Eastern psychedelic drone (“Hidden Orchestra”), and Morricone vibe (“Black Light”).  Everyone gets to play, but one is never quite sure of the overall theme, apart from the general.  Yet after a few spins, the album does begin to cast a spell, throwing sounds around like John Cage’s I Ching tiles.  The strongest tracks arrive in the album’s middle bloc: the telegraph beepings and mechanical rustles of “No Suggestions”, the drones and plinks of “Anything at All”, the reverbed guitar and static charges of “Morning Blues”.

It’s refreshing to encounter an artist who grows deeper as he matures, rather than blander.  While many artists come to appreciate quiet as they age because they no longer like the loud, Deison appreciates the quiet more because he loves the loud and the contrast between them.  (Richard Allen)