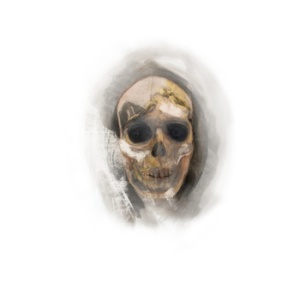 Last summer, New Zealand’s sink \ sink had a great idea that didn’t work out so well: an EP in a box filled with sea glass and shells.  To the band’s horror, the boxes arrived broken and bent, distracting eager recipients from the music.  For its debut album, the band decided to leave design behind to concentrate on writing and performance.  The improvement is obvious; this album will be the first impression for many, and it’s much better than the band’s fledgling effort.

Despite the skull cover, The Darkest Dark Goes is not quite the darkest dark goes; that would be Norwegian death metal.  This degree of darkness is palatable, softened by vocals that land somewhere between those of Cocteau Twins and Dolores O’Riordan.  The music, however, is closer to that of the former: a swirling, sometimes cavernous mulch of reverberation, enhanced by violin, cello and occasional percussion.  In many ways, The Darkest Dark Goes picks up the discarded flag of the ethereal movement, which peaked in the early nineties and is best epitomized by the work of the C’est la Mort and Hyperium labels.  Their lo-fi aesthetic is echoed here, as is an affinity for the timbre of shoegaze.

The album’s thick sonics provide the impression of a crashing wave that never recedes.  The presence of continuous sound lends the project a daydreaming vibe.  Specific sounds fly forward from the wave, landing – yes – like shells and glass on the shore.  Some are tumbled and smooth, drawing attention for their beauty, while others are jagged and undeveloped – the type that are normally left on the ground or tossed back into the ocean.  Thankfully, the former are found throughout the album, while the latter are for the most part confined to a single track.

The vocals are kind and comforting, even when the lyrics are not.  At certain points, specific phrases poke through the mist: “I wanted to make you proud”, which follows piano and backward masking on “Astronavt”, “I would if I could, but I can’t, so I won’t”, which precedes the title track’s first major chord.  At other times, the attention is drawn to a spotlighted instrument: the thick bass at the center of “Gursky”, the clear cello of “From the Year 1752”, the sedate string finale of “Sunset Song”.  These moments provide their parent tracks with pleasant associations.  Less so “Place That I Love”, in which everything seems to go wrong: the drums enter awkwardly, the singer veers off key, and the song ends early, with all the grace of a dropped vase.  Thankfully, this is an aberration.

Slight flaws aside, The Darkest Dark Goes is a solid debut.  The band is young, and has already demonstrated an ability to learn quickly, which should serve it well on subsequent efforts.  Fortunately, dark is not a word applicable to sink \ sink’s prospects.  (Richard Allen)