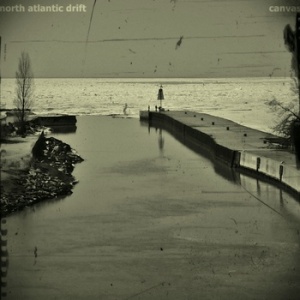 Taking its cue from the monochrome picture of the sea on a rainy day, North Atlantic Drift make an immediate impression as an artistic outfit not only willing to explore the edge of sound, but going further into the exploration of the human psyche, its relationship with the environment and what it takes to make our souls glow (as any ambient outfit that respects itself should do).

With influences that vary from Brian Eno to Erik Satie and from Stars of the Lid to Boards of Canada, it is no surprise that their music has on one hand the melancholy characteristic of many concerned human beings, and on the other, the neutrality of music that has evolved naturally.

The band builds their compositions on a guitar or synthesizer loop while adding processed percussion sounds from the most unlikely sources, which end up sounding nothing like the source, but add to the mystery of the album, as the listener begins to wonder what it is they are listening to. The repeated loops in some cases drag, but not long enough to tire the listener. The band uses them as a stepping stone to something more complete as every track builds up nicely and without too much fanfare.

Tracks such as the hypnotic “North Atlantic Drift”, a lullaby from a Lynch-ian world of weirdness, bring to mind some of the best Bark Psychosis moments, and is full of hope that rises through the darkness with a slow-moving, honey-like melody. “Albatross”, another one of my favorite tracks, takes place in a futuristic wild wild West, and makes Morricone proud with its sonic description of the wilderness and the dangers hiding at every corner.

Canvas isn’t an album that invites you in, but deeply introspective as it is, it grows on anyone willing to be drawn into the world of the album cover. But beware, as this is a cold world. In such a world however, the warmth present throughout the entire album is more appreciated.   (John Kontos)