Tsone ~ At Last, The Splintering Light 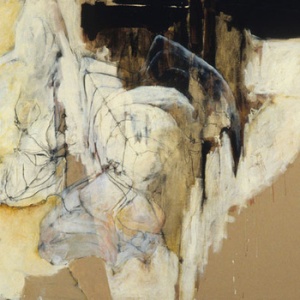 Dark Era’s second release dresses bright drones in a color-muted cloak, accurately reflecting its title: it’s the sound of sunlight trying to break through.  This makes Tsone‘s latest work a well-timed release for the Northern Hemisphere, where the angle of the sun is increasing day by day.  These tracks exude a sense of slowly awakening sound, of beams poking over the horizon – perhaps never more so than on the shy and sullen “Colorless (Flames)”, which waits, peers, and moves over to provide room for the stately bursts of “Lethe, Eridanos, Alpheus” (two of Hades’ rivers, plus the name of a god responsible for the creation of a river).  Despite the titles, this isn’t a journey to Hell; it’s more like an emerging, without the looking back.  At Last‘s intrinsic fuzziness makes it a proper release for the cassette format – dusty and dry, but proud to exist.  The clearest guitars are saved for the final track, which brings listeners closest to the light, splintered as it may yet be.  The title – “Mono No Aware” – refers to the beauty of impermanence.  By extension, this makes the fading notes of the final seconds more beautiful than the the full notes of the former minutes.  (Richard Allen)