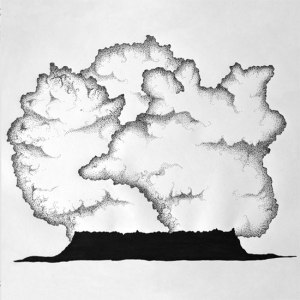 Blame Ansel Adams or John Ford, but there is, hardwired into our brains, a lasting romantic association with the rock formations of the desert areas in the United States. The lack of human influence in many of these regions mean that the imagination can run wild; what stories could these rocks tell? What have they witnessed over the millennia? Despite – maybe because of – their barren nature, they are fertile jumping off points for inspiration and creativity and as such have buried themselves in our subconscious over the years. Whether it’s Leone and Morricone, Wenders and Cooder, or Jarmusch and Young, these rocks and rivers have become intrinsically linked in our psyche with the plaintive strings of a guitar. So it that upon playing Black Mesa, you are immediately transported to the lonesome west, kicking the dust from your boots as the sun blazes down. Jon Porras has tapped into this musical shorthand, the psycho-geography of the place, and it’s incredibly effective.

The Barn Owl guitarist drew upon the desert from his inspiration on this album; the black mesa itself is intended to represent a bridge between worlds that is the goal of our wandering protagonist. And that’s his spurs you can hear as he strides with purpose towards his goal. Porras put the album together through months of gradually building up the initial compositions which might explain the depth of sound that is present here; like the rock itself, only these are layers of recorded guitars. So the work resembles ever more closely the natural phenomena it is representing; the phrase ‘soundworld’ is frequently bandied around but this is a totally convincing place as if we’ve been dropped into the middle of it with only this questing stranger – acting as a spirit guide perhaps – for company.

As befits the landscape that inspired it, the music is of a widescreen, almost self-consciously epic, nature. This album could never have been a series of brief miniatures; rather Porras stretches his work out, giving the guitar plenty of space on the surface whilst maintaining a density deep down. All of the tracks pass the five minute mark, and it’s the longer pieces – the opener “Into Midnight”, the nine-minute “Into The Black Mesa” that leave a lasting impression. Indeed, the middle section eases off the intensity; while these tracks are still densely layered, the mood is more reflective. “Embers At Dusk”, for example, is a moment to breath under the night sky. A Spanish guitar briefly captures the flickering light of the fire, the melody bobbing and weaving in the blackness, a pause before continuing the quest. Some of Porras’ work in the past had a tendency to drift by anonymously; Black Mesa, on the other hand, is a truly powerful record that overloads the senses. (Jeremy Bye)