Nils Quak must have had a tough off-season, because Aether is dark, cold, and bleak, and we mean that as a compliment.  One imagines two tribes, the ambient and the dark ambient, amassed on opposite ends of a great field.  As Quak leaves the ambient tribe, his former companions cry while his new companions cheer.  This is not the Quak we think we know; it’s a moodier, gloomier, starker man holding the sword; and Aether is his ravaged battlefield. 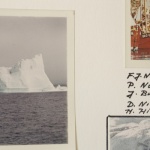 One can intuit the difference by perusing the titles and original cover art (pictured to the right): from Elegy for Seaweed to impassive ice.  From the very first note, Aether is low-toned, shadowy, skeletal.  Winds pass by without the energy to howl.  Metal objects are rearranged.  Forhorn swells rise and fall.  A ship of the dead moves through the mist, propelled by invisible hands.  Is this punishment or is it fate?  Is it destiny or is it deserved?  Is the sepulchral groan of “Hazy Mornings” from the throat of a man who has given up or from one who has seen too much and is now unable to vocalize with clarity?  As the album develops, it enters a cavern of cold with no end and no exit.  Its claustrophobic innards clutch and claw; its spirits are dragged into the abyss.  Light is neither promised nor delivered.

Did Quak intend to make such a dank and delightful album?  Perhaps not; perhaps he was simply inspired by the slow flow of glaciers, of life in near-suspension.  But this is what it feels like to be stuck.  One moves, without intending to move; the earth continues to rotate and revolve, even when we feel caught in amber.  The recognition of these forces lends Aether its distinctive nature.  These aren’t repeating patterns, but arrows of decline.

Welcome to the dark side.  (Richard Allen)