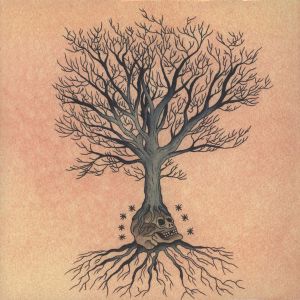 For years we’ve been encouraged to reuse and recycle, and although we’re quite happy to fill a green box with newspapers every two weeks, it’s the first part of the phrase that is more a struggle – can we find a creative use for that broken ruler or moth-eaten cushion rather than contributing them to a landfill site? It’s not something we’re usually very good at, although going back a couple of generations it would have been second nature. Nowadays we need some assistance in the shape of a self-help book or a television documentary to point us in the right direction although often the solution is closer to home. Sometimes all that’s needed is a friend or acquaintance to provide a fresh point of view to make the most of what we’ve got, to make old items new again.

It’s an approach which has been adopted by guitarists David Daniell and Douglas McCombs on their new album – the title itself is a clue, with Versions being drawn from the same sessions that produced the duo’s first album back in 2009. This time round, the tapes have been handed over to McCombs’ sometimes Tortoise associate Bundy K. (Ken) Brown who performs the role that Teo Macero did for Miles Davis or Holger Czukay did for Can – we’ve done our bit, here are the tapes, see what you can make of it. It’s probably fair to say that whilst Macero and Czukay were pretty nimble with a razor and tape, and had no little influence on the likes of In A Silent Way and Tago Mago, they had some lightning-in-a-bottle moments of inspiration to work with in the first place. Having already pulled a pretty fine album – in the shape of Sycamore – out of the 7 hours committed to tape, Daniell and McCombs are placing a lot of faith in Brown.

Thankfully for all concerned, the faith is well placed. The contrast between the two records is immediate – whilst Sycamore‘s opener “F# Song” saw a delicate bed of rippling guitars underpin a decidedly Fripp-esque solo exploration, Versions‘ “Burn After Reading” is more immediate, all grunged up guitars and an early appearance for one of the numerous drummers on the session. Whilst Sycamore was calm, reflective – tasteful, even – across the majority of its running time, Versions is looser, dirtier, scuffed up around the edges. Not on every track, mind – the shortest piece “30265” is similar in feel to the percussion-free passages of the earlier album – but there is a clear distance established between the two records. Even in its calmest moments, there is still an edgy undercurrent on Versions that arguably makes it the stronger of the two albums.

The album is topped off with two live tracks, from the post-Sycamore tour, where Daniell and McCombs (plus live drummer Jason Boardman) showcase their sound without recall to studio trickery and editing; these lengthy excursions take their own sweet time to reveal the mysteries within but, if anything, the live takes only serve to underline the vital contribution of Brown at the mixing desk in the first half – and personally I’d take the taut loops and sharp cuts of “Ley Lines” over the twenty minutes of “Montreal, March 12, 2010” any day of the week. Given Daniell and McCombs’ extra-curricular activities, it may be a while before they get back to record some fresh material, so a third iteration of these sessions might be in the offing one day; perhaps Czukay himself with be invited to have a dabble in the tapes. Conversely, the success of Versions might lead to a veritable stampede of artists beating a path to Ken Brown’s door, hoping that he can work his magic on their old improvisations as well. It may be credited to the two guitarists, but the real credit for Versions has to go to the man behind the desk.   (Jeremy Bye)