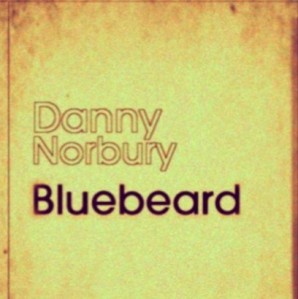 Once upon a time, French author Charles Perrault put pen to paper and created his much admired, spellbinding series of fairy tales. Courtesy of Wist Records comes the latest installment of ‘The Book Report’ series, one that has engraved a memorable chapter between music and literature. Here, Danny Norbury presents six compositions of heart-wrenching beauty, inspired by Angela Carter’s re-working of Perrault’s classic tale ‘Bluebeard’. Norbury’s ‘sound report’ has captured the essense of Carter’s version perfectly, refraining from a Disney-inspired innocence and closely following Carter’s text.

Bluebeard doesn’t require a reading of the novella to be appreciated in its entirety. The music is arresting in its differing textures; smooth delicate paper and rough, hardback skin contrasting the smooth cello tones and dense, melancholic atmospheres. Danny Norbury’s playing breathes with a special kind of intimacy, made all the more prevalent by a couple of audible intakes of breath, leaving themselves on the record, like fingerprints smudged on a page. Norbury enwraps the listener in a personal storytelling. His cello is deeply mournful, each piece shining a cold light on each incident in the story, and the six pieces each feel like a seperate chapter. This imagining of Angela Carter’s darkly gothic update creates an ominous atmosphere; like Cinderella’s shoeless feet, dirtied and smudged from soil and stone, these pieces are roughed up a little in the cello’s grainy, shadowy textures and shimmering vibrato. A reflective mood is made all the more intense by the plaintive and sombre cello, and similar to Carter’s writing herself, the pieces resonate with caressing strings and soft piano melodies, perhaps reflecting her feministic writing.

Norbury’s heartfelt playing perhaps tells of the anguish and mental suffering Bluebeard’s wife would have been subjected to. Her time was coming to an end, and she had only seconds left before facing his fatal blade. This melancholic weight keeps the pieces firmly grounded, while the music remains elegant in a soft grace. The opener mirrors the curiosity in our heroine’s mind, but Norbury is also enacting the tale, and he plays the role to near perfection. The brooding nature is found lurking in the rich tones. Further in, an introduction of pattering piano mirrors apprehensive feet echoing ever closer to the door at the end of the long corridor. Imagery of shock and dread, discovery and punishment are laid bare in a deep, rising tension. Bluebeard’s own deserved fate is settled in Norbury’s dramatic finale, leaving our heroine alone with her thoughts, and tears raining down from the cello, the neck of the instrument poised gracefully over the heart. Norbury’s style is overcast and bleak, without becoming depressing; it’s a dark tale, but one with an uplifting end. So it is that Danny Norbury has created something wonderfully enchanting. Ironically, while researching Bluebeard, one of the primary search results I found was an e-book edition – however ‘The Book Report’ series aims to highlight literature in its physical form. In this edition, Bluebeard can breathe on its own, and supporting this release will help to ensure that the medium shall continue to live happily ever after. (James Catchpole)