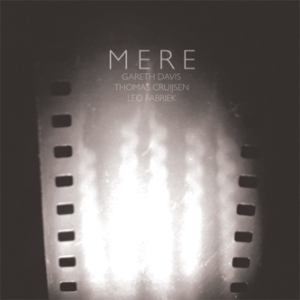 Over the years, bands like the Mt. Fuji Doomjazz Corporation or Bohren & der Club of Gore have successfully explored the painful abysses that populate the silences of improv, drawing listeners into all sorts of moods mutated by psychological collapse. This ‘noir jazz’ – or ‘darkjazz’, as it’s come to be known – perhaps intends to pervert the joyful communality of jazz improvisation, turning it into a mournful ritual of shared sorrow. It is a celebration of pitch-black gaps and failed utterances, a persecution dream of infinite twists and turns that bleed entrancement. Constantly hinged upon experience, this music is sick with life, with a profusion of mental states that borders on the psychedelic. And yet, the link to meditation, to the ‘spirituality’ of such alchemical processes (a blank film reel that seeps an all-engulfing darkness) is often left untouched. Enter Mere, a collaboration between Gareth Davies, Thomas Cruijsen, and Leo Fabriek, and which seems to emphasize that more meditative, psychedelic aspect of darkjazz in the way the players interact and develop the music.

The three instrument lines flow perfectly, coming ever-so-closer together at every moment, building up into a unity that is mostly averted in other projects of this nature (for the darkness is made into a million moving pieces under the subtle grasp of paranoia), but instead of falling into uniformity, Mere achieves the feeling of a tainted meditation. It is not like an invasion of the senses by the mind, but the focusing of the latter; it is not the opening of a third eye but the cruel emergence of a monstrous sixth, gasping athirst of the void. Unlike the impulse of projecting our most incomprehensible desires upon the world, this music turns the tide inward once again, exploding the mild psychedelics of darkjazz into a fiery hallucination of ourselves, steadily bordering on a repetition (the guitar and drums often pair up into a progressive mantra) that is nonetheless always interrupted by the clarinet’s dazing solos, a voice lost among the graves of thoughts. The mantra, uncanny and disturbing, attunes the body and mind to the vibrations of shadows, flickering and unfathomable, an exercise of oneself as nothingness instead of a connection to the world.

This is perhaps where the difference between Mere and other projects lies: theirs is a collective practice of negation, of improv as Dazu Huike’s bleeding arm presented to the Bodhidharma as resolve, the self-exerted violence of letting imagination take over in a blinding moment of painful fusion. It is maybe not a collective affirmation of the unconscious finally set free, but a drive towards the peace of utter exhaustion, a self-contained subjective death. As listeners, we might be able to glimpse at such a thing, participate indirectly in it, and my only advice would be to play this while asleep, infecting one’s dreams with the possibility of ceasing to be, using one’s own instruments to disappear, to invoke the cleansing non-motion of an emotional catastrophe.

All in all, this is a great album, and surely both the fans and the newcomers to this style will find something interesting to take from it. I wouldn’t call it a game-changing entry in the field, but it’s certainly expanded the possibilities for understanding what can be done with this kind of music, so tending to the sublime as it is. So, this is a great year for darkjazz, and from the sounds of it, there is still much to explore within its strange confines, take it to places it’s only hinted at before with all sorts of new ideas. Here’s to the next album of its kind! (David Murrieta)