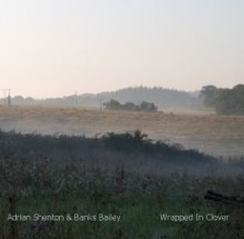 Sight, sound, touch, scent.  Adrian Shenton & Banks Bailey cover four of the five senses on Wrapped in Clover, although completists may wish to lick the cover.  The pressed clover transforms the release into a shared scrapbook.

This four track release highlights field recordings significant to each artist’s childhood, augmented by light instrumentation.  The artists also play in the traditional sense.  The banging of a stick on a steel pipe (or something like it) in “Rapt in Clover” makes one think of a boy trundling through the weeds on a lazy afternoon, swatting away flies, ignoring the crows, hopping by a brook and swinging away freely with an improvised walking stick.  From the sound of the recording, he can’t be too far from civilization.  Cars pass nearby, but he’s likely oblivious.  This is the reverie of childhood: to be in the moment, happily aimless.

Crickets and bells inhabit the opening moments of  “In Which The Goose Has Been Broken”, and yes, geese are a factor.  We hear footsteps, then a gathering rain.  This piece captures the feeling of being caught in a shower while in the fields, a typical occurrence for the young, who tend to ignore Doppler radar.  The child of keen attention simply views this as an opportunity to play in a different way.  As the shower passes, this child begins to investigate his surroundings, to pick up various objects, to consider their sonic properties, although not always in a gentle fashion.  Let’s face it, boys are drawn to percussion.  Shells or rocks are smashed together as a drone picks up steam.  Is this a passing mood, a momentary expression of anger?  The birds return.  The bells begin anew.

A dog makes a great childhood companion, and some breathy canine is enjoying his moment on “Dog Days”, splashing in the brook with his human companion.  The bells sound once more, accompanying the sound of a train; this particular piece seems more of a soundscape than a single-source recording.  The crickets reappear on the closing track, along with the sound of airplanes and calling birds.  It’s a darker piece, representative of its title (“Evening Shadow”), and lacking instrumentation.  This is a wise choice, as the piece contains the mystery significant to the age.  The seemingly carefree young are seldom carefree.  This time around, the bells are clearly those of a church, announcing the time.  Something is coming to an end: a phase of life or a day of play.  The boundary of adulthood can be frightening, but Shenton and Banks don’t push it too far; they allow the edge of the recording to fade into shared reminiscence.  (Richard Allen)