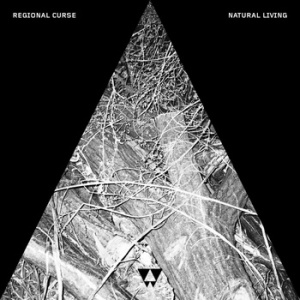 Regional Curse is the solo project of Australian experimental artist Stacey Wilson. As Regional Curse, Wilson paints spacious, mesmerizing zones of deep synth and minimal percussion, utilising the themes of ascension and natural progression. Natural Living, Wilson’s third release, has these themes in eerie abundance, bewitching the listener not just with the synths, but with looping, restricted drums and enchanting vocals. Wilson’s rhythms lay camouflaged in their unsuspected repetitions, until we are suddenly alerted as to just what is happening. It is at this point that we realise any resistance is too late, and we sink under the deepest hypnosis.

With every passing second, circular rhythms edge us closer towards deeply meditative thoughts. Laser-like synths ooze a venomous liquid, coiling around the hypnotic rhythms like a rattlesnake waiting to strike…and it is a strike which, deliberately, never arrives; a warning can be even more debilitating than any actual attack. Wilson’s electronic home-made drums drip with a poison that circles around but never suffocates in proximity, while we remain transfixed and oblivious to any imminent danger. Add to this a malfunctioning looper pedal and we are left with a warped, slightly eerie state of transcendence, like a split second image of an eye staring back at us, or a promised afterlife that was never envisaged.

The iconic pyramid, as seen on the artwork, mirrors the notion of a natural ascension, an ancient and mysterious structure that is both highly symbolic and spiritual in nature. “Traditional Ascension” sets the scene, as synths sneak around dark hallways, sighing and reverberating inside the space. The vocals that enter are drowned in a holographic delusion, masked and unable to reach any level of clarity in a series of delayed tidal waves and glitched bursts, rubbing against swelling synths like the motion of waves on an undiscovered planet. Cool and steady, the rattling rhythms lay the foundation for Wilson’s experimentation, and any feminimity is slashed in Wilson’s flat-lined pitch, icing any potential emotions via a cold stare.

Maybe, just maybe, this is the future of which the Mayan civilisation foretold, and maybe even the ancient Egyptians through their tantalising symbols, buried in hieroglyphics. In most instances, a lack of emotion in a vocal could set alarm bells ringing, but here, in this setting, the effect is wonderfully warped and completely intentional. Wilson’s vocals remain energised, yet they suffer from a communication break-up, as if they are a signal from another dimension, struggling to announce themselves clearly.

Natural Living can be found in a temple entombed with a dark history; a claustrophobic pyramid, with immense walls scraping along the shoulders in the narrow hallways. Shushed voices lay hidden and unsuspected around every corner, almost as if they were performing an incantation and conjuring spirits in hushed, feminine whispers.

Shimmering synths hover like a UFO landing in the Australian desert, pointing lasers of flashing lights in every direction. The steady pulse never gets monotonous despite its repetitions, displaying a thoughtful contour within Wilson’s experimentation. If this is our ascension, our destiny, then it may resemble the apocalypse of a nuclear dawn, or angels that may resemble alien imagery as seen in popular culture, preparing our eyes for what may arrive in the future.

This future is made a reality on the coda, “Best Believe”, as a sight of a strange craft revolves in the sky. This is the tip of the pyramid. An excursion into the occult might just sound like Natural Living, and the electronic synths are as deep as the earliest experimentations that would develop into Kosmische music. Natural Living, to an extent, reminisces over the remains of early synth music, with perhaps a longing for their return, but it is also its own futuristic temple, and the bones of the era are left to adorn the walls.

Natural Living shouldn’t induce any nightmares, but the suggestive experimentation leaves a spooky apparition hanging over our shoulders. If your chosen temple is the (apparently) crumbling genre of witchhouse, then Regional Curse is the Australian altar at which we must bow.

I want to believe. (James Catchpole)