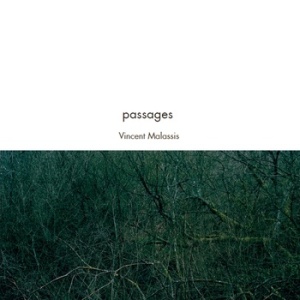 We’ve only just discovered the Drone Sweet Drone catalog.  Yesterday we reviewed Benjamin Jarry’s Splendid Isolation, which we classified as modern composition with a drone influence; today we turn to Vincent Malassis‘ passages, which we define as drone with a modern composition influence.  The two releases operate as mirror images, and form a sonic meld when played back-to-back.  Even the vibrating hum at the end of Jarry’s final track finds echo in the ending of Malassis’ final track; the two seem to have boarded the same bus, and are meant to be together.  This is not to diminish the achievement of either, as both recordings stand out in their respective genres.

One is not entirely clear what passages Malassis is referring to in the title.  While life’s passages may be the subject, a more fanciful reading is that the transportive nature of the drone opens passages to the subconscious, to greater insights, to revelation.  When looking at the cover, one might recall physical passages as well: clear-cut channels or self-hewn paths.  The most direct interpretation is that the music itself forms passages down which one may disappear: rabbit holes of sound, filled with shimmering sheets and slippery sub-melodies.

One would never guess this from the opening track, a stubborn crackle demanding attention like a colicky baby.  This abrasion prepares the ear for more such sounds, but the artist has other tricks in mind.  He seems to be saying, “If you can handle that, you can definitely handle this“, before edging into the EP’s first true drone, a series of washes and waves that dances on the periphery of noise without toppling over.  Just as the levels are beginning to edge toward the red, the artist relents, offering a surprisingly quiet interlude that lays the sheet for a bed of processed bells.  This is drone with direction: composed drone, which seems at first contradictory until one remembers the label’s attraction to neighboring dynamic fields.

Closer “Chrysalide” is the EP’s longest piece, rising from the sub-aquatic depths of the track that has preceded it to seek form and fortune, like a prehistoric fish who has just discovered it has little legs.  This Skelton-like piece doles out its drone, note by sullen note, until there are enough notes to go around; and something has to be done, since they are not going away.  In the final minutes, as if self-aware, layers of strings coalesce into tentative melodies.  This culmination of tone and drone arrives as a revelation; even on repeated plays, it’s hard to hear its genesis.  The invisible shift adds to the allure of an already-peculiar recording whose tensions – between genres and dueling passages – create the balance in its multi-chambered heart.  (Richard Allen)