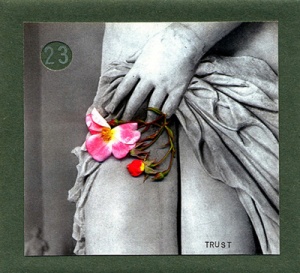 What would you do if you had spent untold hours on a project, pouring your time, your heart and your ideas into its gestation, only to have the project pulled at the last minute?  This is what happened to Colin Herrick of Time Released Sound, who was ready to release TRS023, a hundred different handmade copies surrounding a single set.  But the artist changed his mind after the announcement was made, and Herrick was left holding the bag.  So – when your trust is broken, what do you do?  Most would withdraw, dust themselves off, perhaps say, “I’m not doing that again anytime soon”.  But the old adage says, “If you fall off a horse, get right back on again”, and this is the path that Herrick chose.  TRS023 is now Trust, a project no less remarkable for its contents than for its origin.

In creating Trust, Herrick reached out to artists who had previously appeared on the label, as well as a few friends.  The twelve artists each submitted a track which would be accepted for the compilation without being previewed.  In other words, Herrick said to these artists, I’ve just been burned, but I’m going to trust you.  I should be trusting less, but I’m going to trust more.  The result is a surprisingly unified album, flowing track to track as if pre-planned, a sunset of timbres fading into each other in preparation for twilight.  The album is thoughtful and ponderous, dense with classical elements and slow-tumbling moods.  The benefit of signing like-minded artists is well-displayed here; the tracks, rather than the artists, come across as friends.

Before playing favorites – an inevitable reaction to a compilation – it’s important to note that every track is strong enough to be somebody’s favorite.  My ear is drawn first to the work of Strië, because I trust her; I know that everything she produces will be worth buying, from the string arrangements of Greg Haines’ last album to her own stellar Ohtul.  It is an honest pleasure to hear “Pomsta Jelenov”, a dark, string-laden track that seems perfectly suited for Halloween, offering a low rumble of suspense, as opposed to a cheap jump-from-the-closet scare.  Strings also feature strongly in The Frozen Vaults’ sublime opener “Cloak of Lingering Fog”, while crackle and hum add light texture.  Rudi Arapahoe’s “Double Bind” surprises with time-stretched thunder and light siren calls.  Arapahoe also deserves credit for mastering the entire set, which is crisp and clear from start to finish.

The second half of the album is more ambient in nature: restrained, subtle, quiet but substantial.  Many listeners will adore the one-two punch (or perhaps tap) of Wil Bolton and The Humble Bee, followed by the docks and chirps of Antonymes.  By the closing track – Richard Moult’s ivory and golden “A Nameless Hill” – the soft slip into darkness is complete.  In the metaphorical sense, the light has disappeared, but in the spiritual sense, it has been restored: Herrick’s trust has been rewarded in a manner that should encourage artists and labels everywhere.  (Richard Allen)