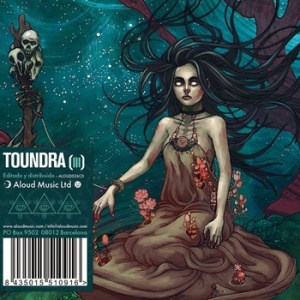 The third time around for Madrid’s Toundra, and this one’s a doozy.  One look at the cover, less subtle than the iceberg of (I) but in line with the Cupid-shot children of (II), and the message is clear: there’s no holding back.  Toundra brings the house: post-rock, prog rock, metal, thrash, maces, rocks, spells.  Yes, they throw in a thunderstorm.  Why not?  This is what we want with the windows down.  This is what we want at the backyard party.  This is what we want when we’re bored, or depressed, or angry: smart, powerful music.

Toundra has always been melodic, but on (III) they use their trump cards frequently, providing their tracks with extra punch.  The surprising strings of the opening track are an early indication that the band is ready to rumble.  They’re not even necessary; “Ara Caeli” has already established itself with memorable riffs by the time the strings appear.  Even after the strings, the listener is content: so to throw in a low-end churn (3:00), a tempo lift (3:29), a breakdown (4:57) and a stop-and-boom (5:08) is completely over the top – in this case, a good thing.  On other tracks, the bonus feature may be a few seconds of bells (“Cielo Negro”), an acoustic opening – with birds! (“Requiem”) or a horn fanfare (“Lilim”).  At each juncture, once the listener is satisfied, the band throws in one more thing, a generosity that borders on excess without losing the plot.  The viscous guitars, deep bass and rapidfire drums keep the energy up and the blood flowing throughout.  A single “Hey!” and a siren song in the closing minutes of the final track are the band’s parting gifts.

Toundra claims Black Sabbath and Led Zeppelin as influences, which at first may seem strange choices for a post-rock band.  But then one remembers the forays and fancies of those classic rock groups (a full side of “Dazed and Confused” – 26:53! – on The Song Remains the Same) and realizes that the bands and genres may indeed be cousins.  While Toundra isn’t quite in the league of their idols, the band does a fine job of emulating them here while adding modern touches.  We’re intensely curious to hear (IV), as it will bear the (unofficial) name of one of Zeppelin’s best.  (Richard Allen)