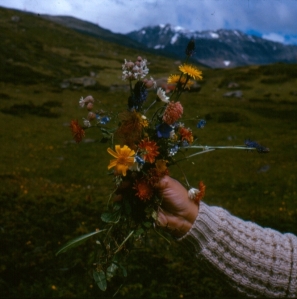 Michael Tanner has had a busy year and has been covered frequently on these pages, although only the most astute readers might have noticed.  In addition to recording under his own name, Tanner is also known as Plinth and The Cloisters, is an integral part of the Tyneham House project and participates in United Bible Studies.  The Cloisters was initially intended to be a long-term pseudonym, but Tanner has since decided to retire the moniker; thus this presentation of new sounds and old.  The new material is found on the primary disc, while the bonus disc collects previously recorded material.  Included is the three-track EP Little Winter, the first review ever published at A Closer Listen.

In the ambient field, it takes a special effort for an artist to stand out.  Tanner manages to do so because he’s willing to expand his horizons.  On The Cloisters, he surrounds himself with seasoned musicians including Aaron Martin (cello), Aine O’Dwyer (harp), Hannu Tuulikki (church organ) and Dead Rat Orchestra’s Daniel Merrell (viola).  The resulting sonic diversity grants the album a maturity that might not otherwise be present; at times the tone is clearly ambient, but the album occasionally ventures into the realm of modern composition.  Choral elements lend The Cloisters an expected sense of grace; while never overdone, these elements fit the project’s title and mesh well with the church organ, harp and strings.  The album’s contemplative nature makes it suitable for meditation; nothing unfolds in a hurry, allowing listeners to sink into a state of higher yearning or simple adoration. As one might predict from its title, “Riverchrist” drifts dreamily through gentle waves of cello, borne softly on Martin’s boat.  “Freohyll Hymn/Nocturne” possesses a more earthy tone, thanks to its birdsong and monk-like intonations.  Even the brief 2:25 of “The Lock Keeper” stands strong, bolstered by piano and confident bells.

The bonus tracks fare just as well.  As the solstice and the holidays draw near, Little Winter again makes a suitable companion; but the three preceding tracks fare better in fall.  The album’s most concise, immediate pieces, they conjure images of foliage and flame: the last burst of an Indian summer, preparing for the drawing down of the year.  When played consecutively, these two discs seem to span a single quartet of seasons, despite the fact that they took sixteen seasons to coalesce.  “Gwillim Grave” is particularly captivating, a string duet that meshes like veins of orange and red.

Second Language releases tend to sell out, but are also available by subscription.  It’s always a surprise to hear what arrives next, but the label’s selections to date have been well worth procuring.  We recommend that prospective listeners sign up as soon as possible.  As for Michael Tanner, we’re sad to see this guise go, but we’re happy that the others will continue to flourish.  (Richard Allen)