V/A ~ Cycle of the Seasons 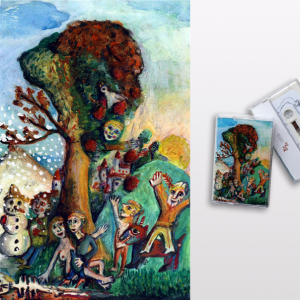 Do certain types of music remind you of different seasons, or vice versa?  Before we get into the review, think about this for a moment.  What music is best for autumn?  What music best reflects winter?  Cycle of the Seasons addresses the question in fun fashion, with four artists each presenting their take on a season.

Every individual has his or her own associations, but for me, spring is the time for playing ambient music, reflecting the end of cold and the beginning of growth.  Acoustic guitars, mandolins, banjos and pianos fit the bill.  The three tracks by Least Carpet contain both acoustic and electric elements, and sound like a May Fair, with flush-cheeked women dancing around the flagpole, merry skirts a-flashing.  A sense of forward propulsion guides these tracks, which burst with the sense of goodness on the horizon.  A hint of bare vocals in the third segment represents the throat preparing to sing as the birds return and the coats come off.

Now to summer, which is different for many people, depending on their environment.  For me, summer is beaches and volleyball, driving around with the windows down, blasting pop or rock; but my southern friends experience more oppressive heat, the type that makes any outdoor activity a chore, a rush of sweat and curses.  Pretty Lightning‘s take on summer is more of the second type, a swamplike moan of bell and muddy guitar.  One can feel the mosquitos biting, intuit the approach of an ambitious alligator.  The tambourines and Grails-esque bass emerge at the three-minute mark of “Swamp”, oozing a psychedelic Cajun groove, while “Mud on My Boots” is reminiscent of deep backwater blues.

Autumn tends to get crowded out by the other seasons these days; we try to stretch summer as far as we can on the front end, while the holidays jump early on the back end.  (One nearby store began showcasing Christmas ornaments in July!)  For this reason, autumn music tends to narrow itself to the Halloween niche: spooky, dark ambient music (such as that found on the Miasmah label) is perfect for the time of year.  John Collin seems to agree with this sentiment; his long track “Croftingman’s Dead” is murky, abstract, and extremely suited to the cassette format.  It’s the sort of thing one might find in a dust-covered woven basket deep in a dimly-lit corner of a thrift store barn.  After three minutes of somewhat angry guitar, a door closes, a hiss and a clunk signal a sonic shift, and the plucking grows sullen and withdrawn.  Silences grow more numerous as the track progresses, as the last leaves lose their color.  The artist coughs; too much dust?

And finally to winter, the retrospective season, one of abstraction and/or peaceful contemplation.  Even though snow seldom falls in these parts, music for watching the snow – or watching for snow – still seems fitting.  Karnak Temples‘ “Winter Constellations” is exactly this sort of track, one of elongated tones and wistfulness.  As nighttime snow seen from below can appear like falling stars, the title is apt no matter what the weather.  The electric guitar tones drift slowly like the rotation that makes the stars and galaxies seem to move, inch by inch, across the horizon, obscuring the fact that they are in fact standing still.

For those who have heard Vivaldi so many times that Four Seasons has lost its impact, Cycle of the Seasons may make a suitable substitute.  The concept may be simple, but the evocations run deep.  (Richard Allen)