Mentallo and the Fixer ~ Music from the Eather 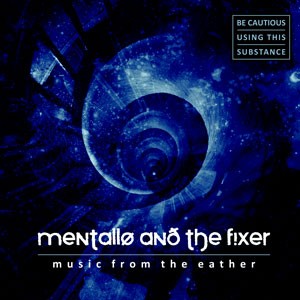 This 3-disc box set is massive in looks, sound, depth, height and breadth.  Its quality flies in the face of the popular belief that artists grow less effective the longer they record and the more hallucinogens they sample.  After twenty – yes, twenty – years in the business, Gary Dassing has recorded his finest album.  I’ve been following the act since the onset ~ those who own old copies of IndustrialnatioN magazine can dig them out for proof.  But this new incarnation of Mentallo and the Fixer is a far different beast from that which haunted the industrial clubs of the 1990s with hits like “Decomposed” and “Legion of Lepers”.  Gary Dassing has carried on the family name without his brother Dwayne, and ever since 2007’s Enlightenment Through a Chemical Catalyst has introduced an even greater complexity than one would have thought possible.

On this album, there’s always a beat or pulse, although the drums are in a constant state of flux.  One pattern launches a song, another takes over, a third taps it on the shoulder, a fourth sneaks through the back door.  The same is true for the keyboards, which gurgle, vibrate and shift.  The hugeness of the sound – incredibly crisp production, multiple interlocking matrixes, few spaces between songs and only occasional dialogue samples as markers – blows away all rhythmic competition.  In terms of sheer dancefloor power, Music from the Eather is the new gold standard.

Perhaps the biggest surprise is the album’s pedigree.  Industrial music is at the very tail end of its relevant life span.  Earlier this year, Side-Line magazine bemoaned the lack of new ideas in the genre, indicating that even the experts and fans were fed up.  The peak era of excitement was the late 80s to mid-90s, when Skinny Puppy, Front Line Assembly and Front 242 ruled the roost.  Then Nine Inch Nails broke through, and innovators such as haujobb appeared ready to take industrial music to the next level.  For a while, the sub-branch of IDM (to which this album belongs) blossomed, while the main branch struggled to remain relevant by watering itself down with jungle and techno rhythms, losing its identity in the process.  Today’s “mainstream” industrial music sounds much as it did a decade ago, undeniably powerful (especially in a club) but no longer original.

This album could change all that.  Unfortunately, two issues will impede such progress.  The first is that once a daring and original album breaks through, others seek to copy its template, rather than to make equally daring and original music themselves.  The second is that this album is too difficult to copy.  There’s so much going on at any given time, so much attention to detail, and crucially, so much experience behind its production that one doubts any other artist could produce such a thing.  In the last ten years, the only other artist who’s come close is Totakeke, who (thankfully) has an original sound of his own.  But in Music from the Eather, Gary Dassing lays down the gauntlet.

Mentallo and the Fixer has always been generous to its fans.  This album arrives swiftly on the heels of a 4-disc collection of early material, and is offered in a couple different versions, the best being the 3-disc set.  The third disc offers both remixes (most from the current album) and originals, and is just as exciting as the primary discs.  Dassing’s remixes wander far from their original architecture, which means that one never feels they are hearing the same thing twice.  It’s also worth note that these discs run very close to their 80-minute allotment, which can make consecutive listening an exhausting, yet enervating experience.  The sound samples below are woefully inadequate in communicating the character of this massive release, but for any fans left from the industrial renaissance, as well as anyone invested in the future of IDM, this is the year’s most essential album.  (Richard Allen)