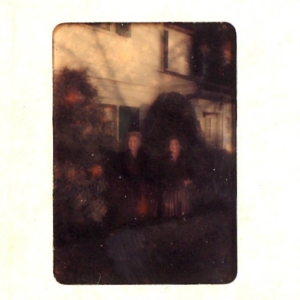 The beautiful Tarsia is the first full-length album released under the name Giulio Aldinucci, better known by his moniker Obsil.  His three previous records as Obsil have been rightly praised, and Aldinucci’s gift as a composer and soundscaper are in even more clear relief with his latest work.  Anyone who has heard Obsil, I’d imagine, must be already convinced of his formidable skills, but even his most ardent fans will surely be  impressed by this finely crafted album.  The title alludes to the craft of creating pictorial mosaics out of inlaid wood developed in the Middle Ages and Renaissance in Italy, and is as apt a metaphor for Aldinucci’s practice as can be made.  A skeleton of field-recordings is fleshed out by various instruments, treatments, and electronics resulting in engrossing soundscapes that actually warrant being called compositions.

Boule à neige,  his free EP on Laverna  released earlier this year under his own name doesn’t quite suggest this evolution.  On the surface, its hard to pinpoint exactly what, if anything, has changed.  The basic superficial elements are still present- defined structures, seamless interweaving of field-recordings and acoustic instruments, electronic processing, sublime textures- yet Aldinucci clearly evolved as an artist enough to justify that this is not an Obsil record.

The terms “narrative” or “cinematic”  are surely overused in describing instrumental music.  Tarsia does, however, have an undeniable sense of dramatic weight, like instrumental radio play with distinct scenes and events. Tasia opens with sounds of birds, people shuffling around down below,  a peaceful scene,  electro-acoustic swell, strings and voice.  The album feels coherent – these tracks certainly belong together- but each is distinct and follows its own internal logic.  As with any successful collection, be it of short stories or a fashion line, the individual pieces maintain a sense of individuality despite drawing on the same techniques and the same palate.

The general mood tends towards melancholic, but the timbres are often quite novel.  I’m not sure what sort of processing went into constructing this gem, but that doesn’t keep me from enjoying it. The mysteriousness of “Ricassa,” for instance, is certainly part of its allure.  The textures of this album, particularly evident on “Sole” are reminiscent in some ways of recent work by Vladislav Delay,  though Aldinucci’s work is not beat driven but rather employs field-recordings, such as the cyclic sound of waves crashing on a lake front, to create a sense of motion and forward momentum.  This should be taken as a great compliment as Sasu Ripatti is, in the mind of this critic at least, one of the greatest artists working with sound today.

Despite being characterized as a collection of soundscapes, Tarsia is a very melodic and dynamic album, given added complexity by the ways in which the components are laid together. Released by the Home Normal imprint Nomadic Kids Republic (who have had a streak of great albums lately), Tarsia was skillfully mastered by label boss and musician Ian Hawgood.  Like the wood inlays that share its name, the beauty of Tarsia is in being able to see both the parts and the whole  simultaneously without sacrificing its allure.  (Joseph Sannicandro)