Coterie Collective ~ Neck of the Woods 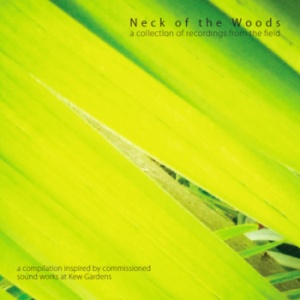 The Coterie Collective‘s Neck of the Woods may catch some downloaders off guard, albeit in a pleasant way.  The album’s Bandcamp page provides no indication that listeners are hearing but a ten-minute selection of excerpts from an 80-minute album.  And yet, a certain amount of charm is involved in hearing field recording miniatures, devoid of their original context.  Brevity’s advantage is that no sound has a chance to stagnate.  Together, these snippets might make a compelling CD3″ or even a soundscape.

In their full versions, many single tracks are longer than the entire length of the Bandcamp set.  The expansion is helpful on the more effective tracks, which are allowed room to breathe, exposing various nuances along the way.  This is the modus operandi of the project, which began when a series of sound installations inspired interaction: artists bringing their instruments to sound-specific sites and recording both in twain.  The settings can be found all across London, and specifically Kew Gardens: the Bamboo Forest, the Waterlily House, and more.

Are the (unidentified) avian residents reacting to, or singing around the strings and electronics that 10Sui brings to the area?  It’s hard to tell, but by mid-piece, the tweets seem oddly rhythmic.  But if they are singing, what are they singing: What are you doing near my nest? or We’re glad you’re here?  In the closing minutes, the birdsong seems to have been manipulated to match the music; if not, these are some wildly intelligent birds.  In contrast, Leslie Deere’s “Music Box” seems much more organic: a wind-up toy near running water.  But again, toward the end, a bird seems to be adding commentary.

When Nadine Richardson plays her flute in the Bamboo Forest, she seems to be playing for an unresponsive crowd.  But for better or worse, the flute has often been associated with birdsong.  Perhaps it simply fits more smoothly into the landscape.  A scratchy record plays at the start and returns midpiece, but a passing plane seems to bring greater avian agitation.  Due to the voiceover, this piece would not have seemed out of place on last year’s Tyneham House.  Saskia Moore seems content to listen to a nearby flock, which sits nicely with them as well.

The combination of garbled and sweet voices make Riz Maslen’s “The Lip of Chaos” somewhat of an oddity, although it matches its title.  Footsteps, bell tones and random clatterings eventually give way to a drone piece with occasional choral echoes; of all the pieces here, this is the least likely to have been recorded in the neck of the woods.  Most bizarrely, the highlighted song is “Somewhere Over the Rainbow”, but it’s lent such a peculiar tinge as to seem almost menacing.  “The Lip of Chaos” doesn’t play well with the other tracks here, but conversely, it’s also the most interesting piece.

The second half of the album returns to the opening timbres.  Patrick Farmer breaks branches while children cry and scream; Kaffe Matthews turns a host of objects into percussive instruments while a woman’s voice is folded into a water- draped sound field; by the end, everything topples into a well of drone.  Angharad Davies whomps on metal and plucks strings (loudly), provoking a response from passersby; when his approach grows softer, the birds return.  Dawn Scarfe records the Marshes Reed without adornment, and Philip Granell plays violin in the Waterlily House, which doesn’t sound too much like an interactive recording at first, save for some slamming doors in the background.  When the instrument is put down, more natural sounds enter the mix, no matter how Granell tries to scare them away with his exuberant singing.  It’s the joy of a child, surrounded by nature, even if the nature is itself contained.  As Neck of the Woods draws to a close, we realize that as much as we think we may have tamed nature, we remain a part of it as well.  But how easily, and how often, we forget.  (Richard Allen)