The Floating World ~ We Hunted 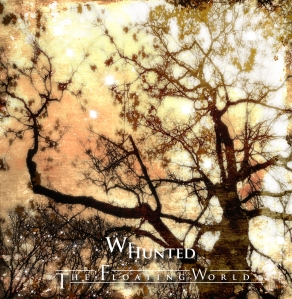 When is a flute album not a flute album?  When the flautist is the leader of a band, and when the album has a purpose beyond the promotion of a single instrument.  Amanda Votta, the guiding hand behind The Floating World, has no compulsion to be conventional.  We Hunted, by not trying to be a flute album, ends up making a strong argument for the more frequent inclusion of flute in rock constructs.

Votta’s play is not simply note after note: the artist is concerned with textures, variations and extensions.  By virtue of its nature – the ability to prolong tones – the instrument lends itself well to drone.  When Neddal Ayed’s guitar tones reverberate around Votta’s breath notes, one can imagine the two trading shimmer for shimmer.  Grey Malkin’s bells add a spiritual sheen, especially at the end of “The Older Blood”, which combines dark tolls and individual ringings with light finger chimes.  In like fashion, the ritualistic “Beyond the Hills” imitates the tempo of a funeral procession.  The bells are used only as accents, while the wailing guitar imitates the mindset of the mourning.  Yet despite her generosity with the spotlight, Votta is clearly in control throughout.  Her playing grounds the other performers, and her performance lies at the heart of each piece.

“Fog and Fire” presents eleven minutes of subtle mood.  The flute acts as fog and the guitar as fire, one leading to the next until both are subsumed by a sheet of sullen sound.  Another extended piece, the nine minute “The Moon Remembers”, evokes contemplation through the careful layering of sounds both vertical (speaker to speaker) and horizontal (one atop the other).  Rhythmic drum hits accentuate the feeling of holiness.  While the track seems more concerned with pattern than any overt melody, such construction honors both the mandala and the Buddhist concept which inspired the band’s name: ukiyo, the floating world.  When the band finally rocks out in the brief closer, “Ocean”, it’s as if to say, all may be ephemeral, but we are here now.  This physical reminder completes the circle:  approaching and departing, present and not-present, stationary and yet transformed.  (Richard Allen)