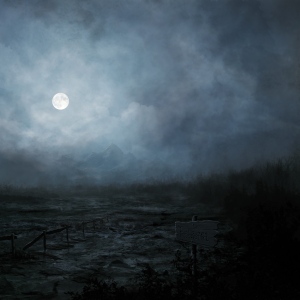 The work that Christoph Berg produces in his Field Rotation guise is darker than the work he produces under his own name.  The timbre is smoky and grey.  The passages seep across the sound field, acting more like tendrils than trunks.  One can imagine being lost in the woods as a deep mist drenches and descends.  If Berg’s work is mid-spring, then Field Rotation is late fall, when the world is growing more mysterious.

Acoustic Tales, released in 2011, was more immediate than Fatalist, so the sprawling nature of the new album may catch some listeners by surprise.  The elements are still present: creeping strings, thoughtful piano chords, occasional operatic ooohs.  This time around, the music seems content to coil without striking, reflecting the nature of the title.  Fatalist honors the theory that all things are cyclical, but does so with the weary resignation of an Ecclesiastes rather than with the joy of Japanese art.  In this mindset, history repeats itself like nature; we are doomed to make the same mistakes all over again.  (Jeff Goldblum’s character in Jurassic Park quipped that we aren’t making the same mistakes, we’re making new ones.)  It’s not clear whether Berg shares this worldview, but on this album, he effectively expounds upon it.  It’s impossible to be motivated by this music, which seems to whisper, stay in bed, stop trying, it’s no use.

The first half of the album stays away from overt repetition, which makes it more engaging.  Strings and samples do repeat – after all, the subtitle is The Repetition of History – but they do so more gently than the piano in the second half.  Ironically, the most engaging track is the one that is almost not there: the ultra-quiet title piece, in which atmosphere trumps music.  In this piece, static pops resist the soft interruption of strings, rather than the other way around.  By the end of this stark album, the repetition itself has become a burden, which may be the point.  In the same way as Buddhists seek to escape the cycle of death and rebirth, those listening to this album may find that they do not agree with fatalism, at least on a smaller scale, and may discover the impetus to change.  (Richard Allen)