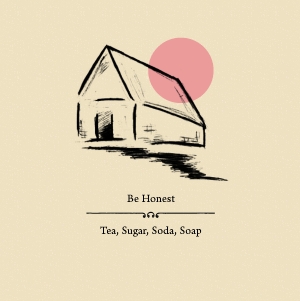 The first release from Fallow Records presents an appealing concept, well-executed.  Tea, Sugar, Soda, Soap refers to the list that Ian Maleney’s grandfather carried with him when he walked the four miles to pick up rations during the second world war.  The music may not be that of his grandfather’s era, but the mood is perfect.  The two tracks unfold in the time it might take to make the trip – twenty-five minutes each – and one can imagine Be Honest retracing his grandfather’s steps, scoring his own walk by composing the music then playing it back on an iPod.

When listening to these guitar and synth drones, one gains the impression that the field recordings were added, but the opposite is true.  The field recordings were collected on a series of trips to Irish boglands, which explains the watery sheen of “Tea, Sugar”.  These same sounds greeted previous generations; water is water, and its timbres are eternal.  With  a little imagination, one can even speculate that the birds are the descendants of the birds Maleney’s grandfather once heard; that the same rain once fell on the land his grandfather walked; and that the same cutlery was used on the dinner that awaited his grandfather when he arrived home.  While listening, we fill out the story ~ perhaps the grandfather was a man’s man, who did what had to be done.  Perhaps he had a generous streak, returning home with more than four items ~ rock candy for a child, a flower picked for his wife.  It takes only a skeleton plot to inspire details.

While “Tea, Sugar” offers similar volume levels throughout, “Soda, Soap” occupies a wide dynamic range.  A storm has risen.  Grandmother is clearing the dishes.  Soon she and grandfather will settle into their favorite chairs – a rocking chair for her, a cushioned arm chair for him – to sip their tea and watch.  The world is not safe, but they feel safe, at least for the moment.  Dramatic synthesized tones, like organ and wind colliding, arise early.  By the fourth minute, they are dominant: loud, abrasive, unsettling.  Will the horses panic?  Will the timbers hold?  Will the fire stay lit?

By mid-track, muted melodies poke through the ether, like a band lost in the gale.  By the thirteenth minute, they have passed, and the birds have begun to return.  Even though the drones rise again by the end of the piece, it’s clear that the storm is ending – the war, the rationing, the rain – and that the boglands are safe to travel once more.  Tea, Sugar, Soda, Soap is an excellent start for the label, an evocative release whose simple title belies its resonance.  (Richard Allen)