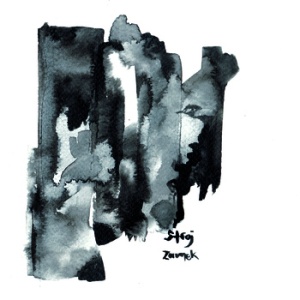 Drone Sweet Drone Records continues to expand its field with the fourth album from enigmatic French musician and songstress Golem Mécanique.  Every aspect of Stroj/Zamek is mysterious, from the Czech / Polish title (Machine/Castle), to the blurred cover art and superimposed inner type, to the music and its inspiration.  A visit to Prague led to this otherworldly “ghost worship,” this “meditation on a grave”.  The results are as sepulchral as one might expect.  The project sounds like a field recording taken in a tomb, graced with soft, mournful worship and EVP.

In the three-part “Stroj”, the sound of birds are echoed and twisted.  Modest mechanical drones rise and fall.  The ghost(s) seem agitated, but not quite angry.  At first, they rattle about and cause quite a clatter before falling suddenly still.  Golem Mécanique enters like a ghost whisperer, uttering multitracked rasps, chants and holy moans.  The ghosts seem at first to be tamed, but quickly revolt; their pain is so great that no siren can soothe them.  A bell tolls at the end of “Stroj/1”, or the memory of a bell; the sound may be an elegy or an attempt to ward off evil.  Footsteps land on leaves, then evaporate into ether.

“Zamek”, also presented in three parts, begins in a more electronic fashion, with stutters, grinds and loops, sounding like a dark ambient work from Cold Meat Industry.  Emotion has fled, leaving only the impression of creaking doors, rattling chains and pipes dragged slowly across the floor.  This does not sound like a that place one would like to visit, but it remains a place that one would like to hear.  By the middle section, Golem Mécanique has become part of the castle, a worshipper joined to the object of her worship, a ghost whisperer who is now the whisper of a ghost.  (Richard Allen)