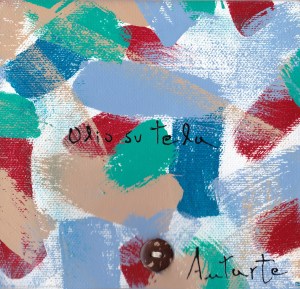 It’s a good thing we listen to more than a single track before deciding on a review, because Olio su tela (Oil on Canvas) begins with acoustic guitar and clear, romantic vocals: not our sort of album at all.  But by the end of “La notte delle lucciole” (“The Night of the Fireflies”), one begins to hear hints of post-rock.  Here comes the swirl, here comes the glockenspiel, here comes the crescendo.  Could Italy’s Antarte be throwing us a curve ball?  Yes, they could.  Perhaps listing Sigur Rós as an influence should have been a dead giveaway, but the slow shift from pop to post-rock still comes as a surprise, and makes one wonder how deeply post-rock has engrained itself in the popular culture.  Might it be that Jónsi’s advertisements and soundtracks have opened doors for a new generation?

Antarte clearly wants to appeal to multiple audiences.  In a successful attempt to expand their sound, the trio calls on the aid of five additional musicians on instruments ranging from the accordion to the trumpet to the suddenly popular mandolin (which also originated in Italy).  Remove the vocals, and no one would be injured; include them, and make a play for the mainstream.  It’s a difficult decision, and the band strides right down the middle.  Some of the lengthier tracks, including “Cenere” (which means “ash”, but is also the title of a silent Italian film) focus on the music, but incorporate vocals at key moments.  That track’s elegant female coda creates one of the album’s best memories. Another such moment occurs at 4:27 of “Settembre”, as the mandolin is joined by the violin and uncredited piano; then again exactly one minute later, as the song makes its final surge.

This being said, half of the tracks, and the vast majority of the album, are vocal-free.  It’s difficult to imagine what the opposite type of listener might think: one who loves pop, adores the opening piece, then wonders where the singing has gone.  One hopes that albums such as these might serve as entry points to a rich world of instrumental music, as colorful as the cover’s painted hues.  Just don’t be surprised if this album makes the charts; it’s got the mass appeal to make it big.  (Richard Allen)