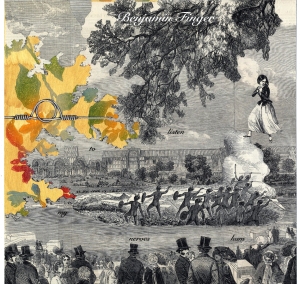 It’s a bird!  It’s a plane!  It’s ~ oh, wait, I was right the first time, it’s a bird made out of old piano parts.  We don’t see this sort of thing very often!  Those who are lucky enough to snag a limited edition copy of Listen to my nerves hum will get the chance to see it in person, but others will have to be satisfied with photos.  With this release, Time Released Sound continues its run of creatively packaged releases, determined to give the physical format its best chance at longevity.  70 copies will be available in June, but for those who miss out, there will also be a vinyl edition, as well as a CD edition with five bonus tracks. 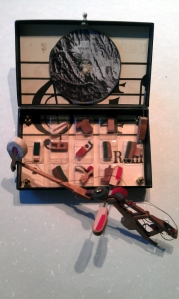 The Hammerheaded Wippin Bird is certainly unique, but so is Benjamin Finger, whose Woods of Broccoli album made me do a double-take when I first encountered it; apart from Veggie Tales, there seemed little precedent.  Finger has never been one to play it safe, and Listen to my nerves hum is another example of the film maker / composer’s playfulness.  On the surface, it’s a piano album, but below the surface, it’s a tricky melange of music and field recordings that beguiles through light oddity and verve.  At first, the piano dominates the foreground, but as the album progresses, the other sounds begin to draw the attention, which is partially a factor of what the label calls “deceptive repetition”.  In other words, once the ivories begin to repeat, the mind is freed to wander through the remainder of the sound field. 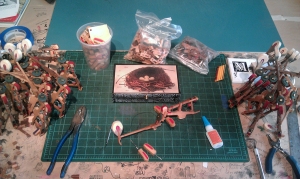 Fair warning: Finger does not intend to put listeners to sleep.  This is not that kind of ambient album.  Feel free to try; but anyone able to drift off quickly will be startled awake during the third piece, which contains a crash so convincing I went outside to see if my car had been vandalized.  Ironically, this intrusion follows a segment of birdsong.  One suspects that this might be Finger’s commentary on the “typical” piano / avian blend.  Much more appealing are the fireworks and cheers of “Año Nuevo Acid Crackers”.  Considering the local wildlife, Finger may have missed an opportunity by not including an elephant seal.  The military drums of “Ode to Blissa” (the final vinyl track) also make an impact, although the early vocals cause some distraction.  These occasionally pop up in other tracks as well, although they never hang around for long and are typically indistinct.

Bonus tracks are often throwaway tracks, but not so on the CD.  The five additional tracks contain a couple of the album’s best moments, which include some “pure” piano pieces (12-14) as well as its neatest segment (2:03-2:09 of “Voice Crackers”, an alternate take on “Año Nuevo”) and a new finale (“Outside of you’s”) which incorporates the sound of traffic and bells.  But of course you’ll want a piano part bird mobile to go with that, won’t you?  (Richard Allen)