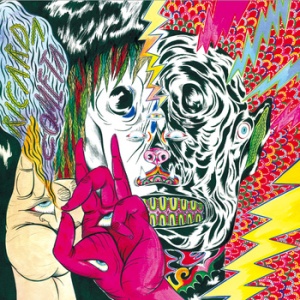 Ricarda Cometa is an Argentinian trio playing music that is as visceral as a punch to the gut, twisting and breaking all sorts of rhythms from Latin America in an avant-garde way that sets them far apart from the current generation of reappropriators of such traditions, whether they come from the ‘punk’ milieu or the electronic scene. Improvisation is the key here, damaging all the commonplace elements into something new and harder-hitting, freeing them violently into a wilderness of noise and lo-fi production, de-colonizing them into a dance-party savage with color and deformed shapes.

The approach is reminiscent to that of late Black Flag (particularly The Process of Weeding Out EP) – a ‘low born’ unrepentant hostility towards the stillness of normalcy via the infinite potential of a violently creative act (in which distortion and speed are the weapons of an ethos), a destructive path from which new life emerges. Ricarda Cometa unhinge rhythms in the way Black Flag unhinged tonalities from the assumptions of hardcore and punk, constantly pushing them to the edges of monstrosity and enlarging their capacity for spontaneous, unexpected associations and realizations. One needs only to look at the fantastic album cover by Japanese artist Hideyuki Katsumata, in which a humanoid creature is mutated beyond recognition like an ancient noise-god made of a thousand images of pop mysticism, to grasp the visual dimension of this displacement as a vibrant explosion of ying/yang dynamics (the ‘head’ divided into two merging sides, and so on). There is an aggressive slant to it all, a heatwave of bodily spasms that thickens the dance-floor dirt into mud, a slight hyper-kinetic psychedelia that tears apart the usual tropes that accompany these kinds of endeavors ever since the Tropicália of the 1960s; the popular/modernist culture that is eaten is not assimilated but vomited, messing all the components up out of some biological failure that produces something which is as utterly amazing as it is ugly.

In this way, you could dance to “Dale matraca”, the first track, while easily imagining a back-alley festival too drunken and raucous for people who cannot picture a modernist rebellion drenched in sweat and other fluids, breaking through both commercial appeal and a high-minded idea of what a Latin American avant-garde could sound like (which usually means sounding just like any other Western one). The speed and sheer guttural spirit of tracks like “El sin-chapa” and “Mango biche” detonate a cumbia-shaped explosive that contrasts with the slower, more ‘classical’ improvisations of “Mas allá vente mas pa acá” and “Tembleque”, which nonetheless tremble with rhythmical energy always on the verge of cracking your skull clearly open (not with a hammer but with the force of a very carnivalistic third eye, a sudden intuition of grasping the world as an apocalyptic party-ritual). Ricarda Cometa ends with the fireworks of “Los animales”, a machine-gun piece of atonality and complex metrics in which a bunch of people intermittently shout the track’s name, flowing into a deranged mindset that wouldn’t be too out of place in a Lightning Bolt album, driving a nonsensical loss of orientation regarding the rhythm and epitomizing the cut-up nature of the whole thing as an humorous exercise of ‘world music’ tainted by the endgame virus of free improvisation.

The only thing that Ricarda Cometa missed with their debut is, well, more music! At thirty minutes, it left me wanting for more, quite a lot more. It is, to say the least, a great first album, and it leaves me enthusiastic about the prospect of a second one. Whether you come from Latin America or not is irrelevant: this is exciting stuff, and the style and spirit in which it was made is not only interesting but very fun to listen to, open to all sorts of interpretations of which this review is but a superficial, exploratory example. Here’s to more (Dyonisiac) puking! (David Murrieta)