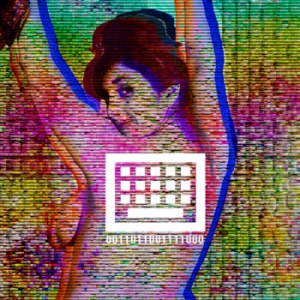 There is nothing wrong with your computer or phone.  Please do not attempt to adjust the picture.  This may be the most un-Google-able album title, track list and artist name in recent memory.  But the music is wild, and there’s charm in anonymity, so we hope you’ll read on while you play the tracks at the bottom of the page.  For those listening at home, be warned: some of these tracks include tones that may be dangerous to cheap speakers.  A digital version is available, but the album is also being released as a limited edition CD/DVD package for those desiring the full experience.

Despite its pedigree,  ⌨ sounds completely contemporary.  The opening track features a vast electronic drumbeat and the hisses, warbles and drones of angry appliances.  It’s a sweet start, but remains within the boundaries of the red.  The agitation arrives at the end of the next track, only fifty seconds in length, as a loud tone grows progressively more piercing.  This wild height is balanced by the sub-bass at the beginning of the fifth, a rumble like a gorging sinkhole.  And look out for the end:  holy crap, is that disturbing.  Anything can happen here, and usually does.  A man speaks of murder; the sound starts to stutter; pop goes the speaker.  Things do quiet down for the 14-minute finale, which starts in near-silence (or perhaps we’re still deaf from the end of track 7) and plays with breezes instead of tornados.  The shift is so extreme that we miss the pain.  (Richard Allen)