The taâlem label has been quiet for nine months, long enough to have a baby; and now the label has given birth to triplets.  These three 20-minute CD-R3″s continue in the family tradition of open-ended experimentalism, and are sure to make their parents proud.  With 90 ancestors watching, the pressure was on for the label’s 91st, 92nd and 93rd releases to achieve.  They work well both individually and as a team; when played in order, they rise from the quiet depths of Philippe Lamy‘s entre deux to the deep drones of Jannick Shou‘s eldey, sounding as if they were intended to be together from the start. It’s no surprise that the triplets were originally packaged as a set. 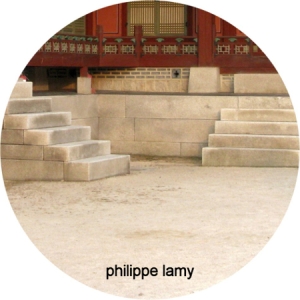 The cover of entre deux appears to portray a temple courtyard.  As if in response, the music is peaceful and meditative.  “mots effacés (words erased)” is graced with dripping water, quiet pops and subtle tones, while “retour de sable (return sand)” clarifies the textures by amplifying each element.  In this piece, the drops sound more like rain, the pops like the echoes of insects and the tones like melodies.  It’s as if Lamy is teaching a lesson on the nature of meditation: when one’s inner concerns are minimized, one becomes more aware of one’s immediate surroundings.  The tiniest movement attracts the attention: the path of an ant, the breeze on a leaf, the gurgle of a stream.  Such sights and sounds grow holy through focused observation, and Lamy has an ear for the small yet crucial source. 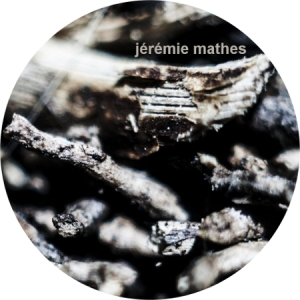 Jérémie Mathes continues in the same vein on oiarzun, which was recorded in two locations: an abandoned farmhouse and a national park.  “higidura (motion)” doesn’t seem active at first, but the idea of motion is often misconstrued.  Everything on earth is moving, whether we notice it or not; Mathes captures the sound of movement through a focused aural lens.  By using a slightly darker brush than Lamy, he relays a mystery of crackle and crunch: is something sinister stumbling through the brush?  Is the farmhouse really abandoned? Could an animal really make a sound like that?  Of course there’s no danger involved: it’s just Mathes, capturing crickets and creaks, the rattling rake, the rusty hinge.  In “vortice”, the wind rises, the rain falls, the animals scurry for their nests and the whole earth is washed clean.   In the end, even the soft waves retreat.

On eldey, the wind and waves become a drone, enhanced by orchestral tones that grow like an impending storm.  This single 20-minute piece is the most musical of the three releases, a reflection of Jannick Shou’s interest in extended and modulated tones.  Built upon a vast series of crescendos and decrescendos, eldey invites the listener in with incremental increases in volume and texture.  By the end, the thickness of the drone fills the speakers and dominates the attention.  It’s a fine finale to the tri-pack, an underscored statement of aural viscosity.  The distance travelled from Lamy to Shou makes for an engaging overall experience, fading into quietude in the final seconds to make room for repeated plays. Please don’t break up this family.  (Richard Allen)