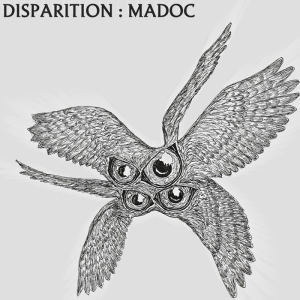 Madeline L’Engle’s A Wrinkle in Time and its sequels have influenced multiple generations of young adults while standing the test of time.  When it was first published in 1962, the initial installment drew criticism for being too religious and for being too secular, a rare feat; children simply pronounced it good.  L’Engle’s generous spirit (and theology) have continued to resonate; last year, Hope Larson’s graphic novel adaptation brought in a brand new audience.  In the same vein, Jon Bernstein (Disparition)’s Madoc, inspired by these classics, may draw even more readers into the fold.  The three-track album takes twists and turns, just like the initial novel; one never knows what’s up its sleeve, only that it will be good.

The album’s one constant is its tempo, which remains steady throughout, like the rhythm of a turning page.  The beat isn’t always present, but whenever it fades, a ghostly presence is implied.  Since the album is conceptual, it’s best to take it in as a whole. Over the course of an hour and a quarter, it draws the listener in like a good novel.  With its longest track clocking in at 37 minutes, singles are unlikely.  Better to approach Madoc as a very good mix tape, reminiscent of those in the Global Underground series.

At first, the music is techno, with deep bass, handclaps and synthesized melodies.  With this base established, Bernstein is then free to investigate other musical realities as if they were wormholes. The album’s best feature is that it never stays in one place for too long; scenes shift like chapters and sub-chapters within each track.  In a typical techno track, an ambient breakdown might lead back to the original setting, but Bernstein prefers to transition to newer, cleaner pages, reminiscent of the progressive trance made famous by D.J./artists such as John Digweed and Nick Warren.  This means Spanish guitar in “Charles Wallace” and industrial rhythms in the midst of the whirling centerpiece “Echthroi”.  A host of sounds awaits, like a host of worlds, and Bernstein is excited to investigate them all.  Some of the finest passages include those with marimba (9:30 of “Echthroi”), electronic bells (16:14 of “Echthroi, 7:30 of “Madoc”), piano (24:20 of “Eththroi”, 9:55 of “Madoc”) and recessed ambience (the closing minutes of the aforementioned tracks).

The album is released concurrently with the EP, Taran Wanderer, which includes two new tracks as well as a fine remix of “Madoc” titled “Madog” (a double allusion to “Mad Dog” and “Magog”).  This much shorter collection is again inspired by children’s stories, as well as the landscape of Wales, and makes a fine day trip ~ but for the full adventure, Madoc is the go-to work.  (Richard Allen)