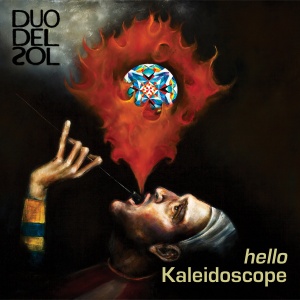 Dúo del Sol was one of the first bands ACL reviewed, and Mira was one of 2012’s most popular reviews ~ so we were not surprised at the success of the duo’s recent Kickstarter campaign, which financed this debut album.  Would Mira‘s magical charm be replicated here?  Or would success change the duo, making them fat and complacent?

Okay, enough teasing.  Javier is jumping in the air while playing the violin, as pictured on Dúo del Sol’s home page.  And Tom is trying to duck under a giant logo so we can’t see his face.  So we’ll have to go to the teaser video to see if they still have the energy we remember.  Oh look, they do!  Wow, they are clearly having a blast!  No wonder audiences love them!  And WOAH ~ WAS THAT OUR NAME IN THE VIDEO?

It is a good thing we liked Dúo del Sol before seeing that, because otherwise, there goes our objectivity.  Woo-hoo, we’re all famous!

Mira also appeared in our feature, The Happiest Music of the Year, and for good reason, as the EP exuded alegría y entusiasmo.  This trend continues on hello Kaleidoscope, but this time around, felicidad is tempered by melancolía.  This results in a deeper and more mature set, as one might expect given the format.  Life can still be a party, but a party is best appreciated as a break from what it is not: the sometimes sorrowful and often mundane nature of daily life.  And so yes, the album contains its belters, its out-of-the-chair, hands-in-the-air songs.  The first of these is “Cualquiera”, which can be translated in many ways.  We’re going with “whatever” (as in “whatever will be”), because the vibe is very que sera, sera (the phrase, not the song).  This early highlight concludes with a quickened tempo and a rush of handclaps, bearing distant memories of Santa Esmeralda’s version of “Don’t Let Me Be Misunderstood”.  “Satoomba” (the song in the video) begins swiftly and speeds to a rousing and nearly atonal climax, climaxed by a single sweet note.  And the amusing “El Gran Luminoso” (“The Great Light”) sounds like the work of a Gypsy serenading a group of insomniac companions outside a circus tent, long after the crowds have gone home.

But not everything here is so light, as the duo lets us know with the wistful “Never the Same River Twice”, a wise choice of opener as it establishes the expectations early.  This is also the first of five tracks that contain cello, an instrument that seldom sounds as if it is smiling.  “Louie” is particularly affecting, a darker turn for the duo, but a welcome one.  Some of Dúo del Sol’s best compositions combine moods:  “Tightrope” begins with pensive explorations, then decides to get out of bed and face the day.  The album also includes the two longest pieces the duo have attempted.  The six-and-a-half-minute “After Words” borders on post-rock, needing only a longer title to qualify.  And while we don’t normally encourage such things, two vocal tracks are included, one in English and the other in Spanish.  Could Dúo del Sol end up with radio hits in two hemispheres?  It’s quite possible; the sprightly “Rain” is a perfect song for summer’s end, and that’s exactly when this album is being released.  By stretching their boundaries, Tom and Javier have demonstrated that they are not thinking of playing it safe.  Those who helped finance this album have spent their money well; hopefully the next will take care of itself.  Te deseamos todo el éxito posible.  (Richard Allen)