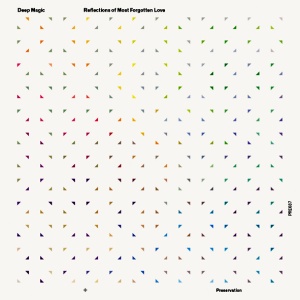 Alex Gray’s latest album skitters and eases itself through the outskirts of the mind, in peripheral antique shops where piles of postcards create an impression of a life that may or may not have happened. It all remains suspiciously familiar. Just prying open the hooked folds of the title reveals a potent somnambulism cloying at the hearts of modern humans.

The California-based Gray has many projects (Sun Araw band, D/P/I, his own label Deep Tapes, etc), and Deep Magic has been his platform for a relaxed, almost behind-the-scenes mode of consciousness. Deep Magic’s last release on Preservation, Lucid Thought, was a therapeutic drift through manipulated field recordings, and Reflections of Most Forgotten Love ramps up the textural vivacity. The album’s strength comes in its diversity: an ever-changing space that complements our brain’s holographic nature. This is not an experience walking a linear path, and it is thus difficult to pin down and describe.

Scientific electronics dizzy themselves and shimmer in the moonlight on “Alone In Her Cave” while plucked instruments and chimes meet at the water’s edge. Like a slide projector changing images, the focus shifts with “I’ve Been Thinking” to tactile piano washes, backed by bluntly processed water effects and ghostly guitar loops. Nothing remains consistent except the ever changing headscape. At times a loop will fade out to be replaced by another, which can break the magic. But most of the time it’s a seamless execution (check the divine “Brighter Days” below), and the changes become as natural as musing whether your childhood memories actually happened or not.

And childhood, perhaps even babyhood, seems to be a potent cornerstone to this deviant dreamspace. The lens through which Gray is looking has more wonder and joy than creepiness. Languageless voices crumble into bubbly laser beams. A wave of meaty distortion becomes an acoustic stroll in the pram. There is a sense of play and humor, as is delivered by the hollow voice on “Only Me” which muses over something meaningful, only to end up at his utility bill. Any darkness is expressed as curious impressions of the unknown rather than something to fear. Everything else is like fireworks over the spinning coral reef of possibility above our little heads.

A lot of folks are calling this album “cosmic” and it’s easy to see where they are coming from. It is, in truth, a very down-to-earth affair. It’s an honest impression of how the mind dances all over the place even when a person is focused and relaxed. It’s quite beautiful the way the music can sincerely emulate the crackling, wobbly edge of consciousness. This is Deep Magic’s most engaging album yet. (Nayt Keane)