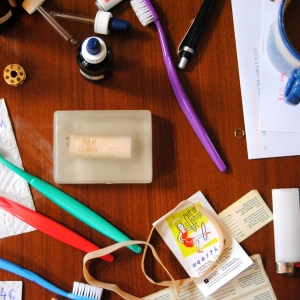 Out of Control is a completely bonkers idea that works: a USB stick cooked into a bar of soap.  The concept is fun, the music is engaging and the soap makes a great show-and-tell item.  Netherlands artist Michiel van de Weerthof made 50 of these bars at home, which sold out quickly (sorry), but fortunately the packaging is only part of the appeal.

The album was born as the score to Wietske Vogels’ circus theatre show of the same name (now “Huis op Hoi”).  The plot – “a peculiar female inventor builds overly complicated contraptions to make her everyday routines into something gracefully awesome” – is integral to the understanding of this release.  Weerthof has also been known to build things at home, including his own instruments.  Like the protagonist of the play, he makes good use of whatever is around him to make music.  The sounds include pendulum and cuckoo clocks (very effective on “Awaken Scape”), toothbrush (actual toothbrushing becomes an instrument on “Toothbrush Tune”), wooden ruler, rooster, bathtub and rubber bands.  Familiar instruments are present as well, from violin to vibraphone, autoharp to accordion.  It seems as if Weerthof is constantly in motion, asking, “What can I do with this object?  What would these five things sound like together?”  The result is like Pawn’s Kitchen EP gone totally off the rails. 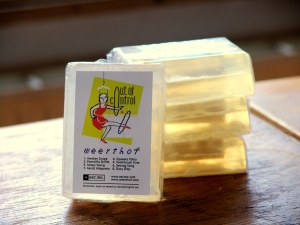 Melody and beats are crucial throughout the EP, which often sounds like a toybox come to life.  Take all of the melodic instruments from a playroom, add the toys that sound interesting when whacked against other toys, and we’re almost there.  The childlike wonder of the female inventor is evident in every track, from opening clock to closing kazoo.  When heard from a musician’s perspective, the entire world can seem percussive.  The difference here is that Weerthof never loses the plot.  There’s a method in his madness, and it goes beyond sampling sewing machines and sodium chloride.  A creative remixer might have a field day with “Pantoffle Skittle”, which is already beat-laden, but the point is that one never need wander too far afield in order to make music.  The “peculiar inventor” makes ordinary routines into “something gracefully awesome”, and Weerthof echoes her journey.  When the faucet makes a beat, brushing one’s teeth can seem more like a rhythmic experiment that a necessary chore.  Out of Control inspires gratitude in the everyday, and its outer appearance is its metaphorical coup de grâce.  (Richard Allen)