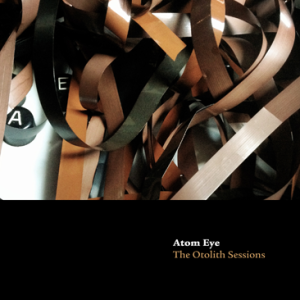 The CD’s subtitle says it all:  “a year’s worth of sonic experiments”.  The teaser video whets the appetite for the album: a snail crawls across a recording strip, a microphone swings from a tree, a metronome clicks in the forest (but does it make a sound?).  Elsie Martins (Atom Eye) uses all manner of old equipment, teasing resonances from battered metal knobs, changing speeds on old magnetic tapes, messing with delay and drone.

So why does the album occasionally sound like post-rock?  Credit the presence of Pete Lockett (percussion), Oliver Barton (saxophone) and Simon Fischer-Turner (noises).  These compositions may be based on tape manipulations, but they have been expanded into fully-fledged works.  Whenever the guitar surges, it knots itself around the base like a skein.  While the musical additions threaten to obscure the tape manipulations, they also add great dynamic contrast.  This is especially apparent at the end of “7 1/2” as the guitars fade and at the beginning of “15” as they rebuild.  The effect is that of sound present yet unperceived, an active world of loops and layers hidden beneath the surface noise.

The release arrives connected to a 50-page book of photographs and recipes, but not just any recipes.  According to Marcel Duchamp (as quoted in the book), “The creative act is not performed by the artist alone: the spectator brings the work in contact with the external world by deciphering and interpreting its inner qualifications and thus adds his contribution to the act.”  Through her “audio cookbook”, Atom Eye invites the listener to become a participant.  Many of the ingredients are easy to find: blank tapes, tape recorders, microphones.  And the instructions are fun to follow.  Never cooked before?  No problem.  Atom Eye will walk you through the process.  Soon you’ll be making your very own tape echoes, delays and loops to serve to your friends at your next dinner party.  This is the most engaging part of the project: The Otolith Sessions is not just about the mysteries of sound, but the joy of shared experiments.  (Richard Allen)