These ten tracks represent the year in instrumental and experimental music: a selection from across the board, along with a summary of current issues.  How experimental is too experimental?  Should bands change?  And of course, Is post-rock dead yet? 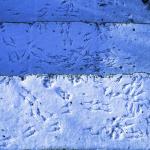 We invite our readers to share this feature with their friends, as it makes a great access point for prospective listeners!

The photograph in this feature was taken by Karen Adams and is available for purchase in a number of formats here.

Your Patience Will Be Rewarded With More Patience
Ambient music often requires a closer listen in order to be appreciated, as it is often comprised of slow, subtle shifts.  Yann Novak‘s single-track EP Blue Hour (Farmacia) best exemplifies these shifts, aligning them with “l’heure bleue”, the time of filtered transition between day and night.  For the optimal experience, start listening just after sunset.

Field Recording or Soundscape?
This may be one of the least understood of our categories, so here’s an ACL primer.  A “pure” field recording is one is which an artist captures sounds and presents them with little or no adornment.  A soundscape is a more rounded work that may include computer manipulation or even the addition of instruments.  This pair of tracks from Kate Carr illustrates the difference.  The first was recorded on her recent trip to Iceland; the second (shown here in video form) was completed afterward.

Better than Arcade Fire
Everyone who listens to popular music has heard of Arcade Fire.  The band won a Grammy for Best Album and just released a follow-up this fall.  We do like Arcade Fire, but we like the solo work of their cellist even more.  Sarah Neufeld‘s first solo album was released this year as well, and in our opinion, it’s better than Reflektor.  Judge for yourself by listening to the title track below!

Is Post-Rock Dead?
People have been asking this question for years, and we’ve been giving the same answer: post-rock is very much alive.  As our Debuts and Downloads feature proves, dozens of new bands are entering the field.  One of the best: Oiseaux-Tempête, led by Frédéric D. Oberland and featuring members of the FareWell Poetry collective.  Godspeed You! Black Emperor fans will be well-served by this ambitious debut on Sub Rosa.

Should bands change?
The question remains controversial because fans are split on the issue.  Some want their favorite artists to create more of the same, while others want them to develop.  Those who don’t change may get left in the dust; those who do may alienate their core audiences.  This year, Sigur Rós “shocked” fans with a more abrasive sound on Kveikur, but the change was more a shift than a turnover.  Not so bonus track “Hryggjarsúla”, one of their bravest songs in years, and unlikely to be used as a nature soundtrack any time soon.

The Strangest Single of the Year
Okay, we admit that it’s possible to record a stranger song, but not without losing any opportunity for a hit.  Kaboom Karavan‘s “KipKap” is original, beguiling and fun.  One can sing along, even though it lacks words.  Heads may nod, even though the military drums appear only in rolls.  The trumpet highlights the groove while the guitar provides the melody.  Pop music will never be the same.

The Future of Dance Music
At 17:13, 0.1‘s The Dance of Mechanical Birds (a single track EP on Feral Media) is the longest track in this feature, and it covers the most ground, from post-rock to glitch to something resembling ambient pop.  There will always be a place for the 4/4 beat, and we doubt that techno will ever lose its stride.  But the future of dance music may be the hybrid that draws from outside the genre.

How Experimental Is Too Experimental?
When asked, “What kind of music do you like?”, many people say “I like all kinds of music.”  But we think they’re lying.  Everyone likes some kind of music more than others, and experimental music can be a challenge even to the eclectic.  In order to be successful, music in this genre must have at least one point of entry. Ricardo Cometa offers their listeners a hook in the form of a chanted title; Jeff Carey indicts the popular music industry by making his songs the length of singles while erasing every relatable quality.