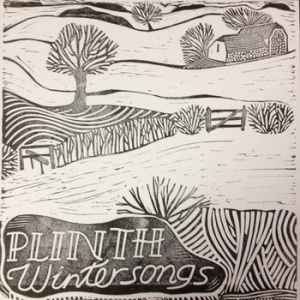 Plinth‘s Wintersongs has enjoyed a series of issues and reissues over the course of the last decade.  After first appearing on cassette in 1999 and CD-R in 2002 and 2006 (Rusted Root), it is now enjoying a long-delayed debut on vinyl, thanks to Kit Records.  It’s also available digitally, making it one of the rare modern releases to appear in all four formats.  There’s a good reason for all this attention: it’s a classic.  Few albums have captured the season so well and have continued to sound fresh after years on the market.

Subtlety is the key to the album’s success.  While the expected components are present – birds, chimes, sleigh bells, glockenspiel, the laughter of children – none are used so blatantly used as to overstay their welcome.  Light guitar and a few gentle “hallelujahs” lend the set a peaceful, reflective, melancholic sheen.  Clarinet, trumpet, melodica and other sweet instruments provide richness like berries in snow.

The mastering is crisp and yet often lo-fi, reminding listeners of the original handmade cassette.  Add the pops and clicks of vinyl, and it sounds like the artifact that it is.  Wintersongs was the first recorded effort from Michael Tanner and friends; in time, Tanner would record follow-ups both as himself and as part of United Bible Studies and The A. Lords, among others.  It’s easy to regard Little Winter and Collected Machine Music as extensions of the themes introduced here, and each of those recordings also went through the process of release and re-release.  Perhaps there is something cyclical to be found in such releases, as the revisitation of themes evokes the nostalgia of winter, each season looking back to seasons before, slumbering before a new rebirth.

The set closes with an instrumental version of Christina Rossetti’s poem “In the Bleak Midwinter”, which begins:

Rossetti goes on to write of Christmas and Epiphany, but the timing is a bit off; midwinter arrives in early February, midway between solstice and spring.  This collection is perfect for the colder months, suffused with internal warmth.  15 years after its initial release, it still soothes the spirit, offering the soft glow of a winter hearth.  If anything, it sounds better now than on its initial release.  We no longer doubt that this music will endure; Wintersongs is a perennial favorite.  (Richard Allen)