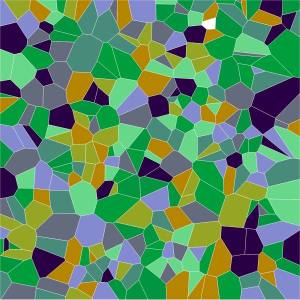 This is the coolest thing I’ve seen all year.  The release is an algorithm that interacts with the computer it is played on, changes every time it is played, and goes on forever (or until the computer overheats).  It can be viewed for free, but there’s no way to buy it.  There’s a pretty stained-glasslike picture that one can watch while listening; the geometric shapes mutate like active amoebas, while the color scheme shifts at random.  The white shape (seen at the top right in the still image) follows the cursor, and when the cursor is moved offscreen it goes as far as it can and waits on the border like a puppy behind an electric fence.  Surf the net while one is playing the piece, and the piece reacts.  Stay inactive and the volume drops, then enters a new phase.  The project is like an Easter egg of Easter eggs; not even the creator knows what will happen next.

For fans of drone and noise, this is manna: fuzzes and buzzes, crackles and pops, high frequency pitches and low sonic squelches.  The longer it plays, the more distorted it gets.  If one’s computer can handle it, one can open multiple randrones at once, or pair them with other sound applications.  Randrone sounds like a Buddha Machine gone rogue, but works like a Tamagotchi.  It’s enormously addictive, and it may be the future of music.  With sounds and sequences unique to the listener and unique in time, one’s experience is intensely personal.  Only your computer can make this music.  Only now.  One cannot step twice into the same electronic river.

The best thing about solo.op‘s “generative art experiment” is also the most frustrating.  This is a very good drone ~ good enough that it would be worth the purchase if it were recorded.  But what is heard cannot be recaptured, because it cannot be repeated.  The next play will be like the previous one, but unlike it as well.  There’s certainly a lesson to be gleaned about the way we view art, which so often implies the appreciation of a fixed substance – a painting, a recording, a book.  Even a concert can be recorded, while a sunset can be filmed.  But this experience is ephemeral.  One likes it; one wants it; and one cannot have it.  In earlier centuries, those who wanted music had to go to where it was being performed or to perform it themselves.  Randrone is the modern corollary: a fascinating experiment, free for the viewing, and well worth the time to watch and hear.  Once one has heard it, one wonders, what’s it doing now?  What will it do on another computer?  This music has a life of its own, and invites the listener to share it.  (Richard Allen)

Or to get right to it, visit the Randrone release page here.