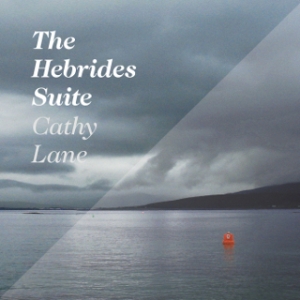 Forty miles off the coast of Scotland lie the Outer Hebrides, an archipelago of islands whose populace have seen some harsh times yet still endure.  Over the past three decades, Cathy Lane has enjoyed a love affair with the archipelago. The Hebrides Suite is her sonic love letter to the land and people.

As a mixture of field recordings and interviews, the album has the feel of a television show without the sound.  Soon one begins to realize that the images are conjured in the mind, and perhaps appreciates the old radio shows a bit better.  Those shows captured the imagination and inspired generations to picture their own images.  While it helps to have the physical edition (with beautiful, extensive liner notes), it’s fascinating to simply listen and to be awash in sounds.  Awash is the key word, as the ocean is never far from the foreground.  Sea salt runs through the residents’ veins. 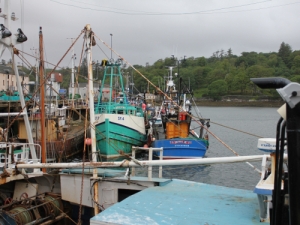 Thanks to air travel, the journey to the Hebrides is easier now than ever, but the traditional ferry still offers the most authentic experience.  Lane writes that “the sound of the announcements, the throb of the engine and the strain of ropes, the clang and scrape of the heavy metal ramp on the port as well as the culinary joys of a macaroni cheese pie are familiar to any traveler to the islands” (abbreviated).  These sounds are captured in brilliant stereo for the home listener.  Unfortunately, due to packaging challenges, no macaroni pie is included with the recording.

Less cheerful is the recounting of a historical eviction, as profits dictated the displacement of people in favor of sheep.  The event may have occurred in 1849, but it still stings.  Even a snatch of accordion recorded at a birthday party can’t undercut the sense of melancholy.  As words tumble in the tide, a dog barks, sheep bleat and metal gates crash.  The layered effect is disorienting, as if past, present and future were colliding in a wormhole.  Looped dialogue lends the collage a world-weary tone.  And more, and more, and more.  And yet the crofters and weavers display an intense pride in explaining their work. 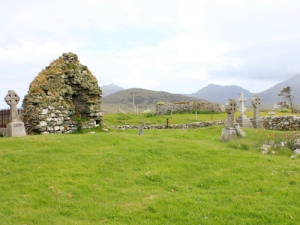 As fascinating as the dialogue samples may be, one longs to hear more of the Hebrides itself, and Lane accommodates this need in the second half of the recording.  “Gaoth (Wind)” is particularly effective, a study in the effects of wind in various locales from beach to pen.  In the liner notes, one learns about the local opposition to a wind farm (36 turbines were eventually installed, instead of 181), but the sound of the wind tells a better story.  In “Watch Over Us All”, Lane captures the sound of Sunday morning worship, but as she writes, “the skylarks singing above the ruined 13th century church get the last word”.  The suite ends with the Hebrides itself, reminding us that the islands existed before us and will likely outlast us as well.  (Richard Allen)