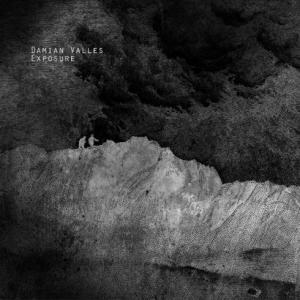 In extreme temperatures, one can become frostbitten in a matter of minutes.  Even layered clothing can pose a problem, as sweat fails to evaporate, increasing one’s susceptibility to the cold.  Exposure is the sound of isolation, not necessarily from other people (as two are pictured on the front) but from safety, predictability, warmth.  As such, this is a frigid album, like a furnace frozen in the depth of night, a stalled generator, or a fire gone out in the woods.  The clanks of “Weathered One” sound like someone pounding on a heater while the winds whip around their body.  One imagines Arctic scientists traveling between buildings during a blizzard as white-out conditions threaten.  Even if they make it to their destination, they might become snowblind and fail to make it back.  Let go of the rope, and all is lost.

Those familiar with Damian Valles‘ work might not have been expecting an album of dark ambience.  Skeleton Taxa, for example, featured lovely piano and female vox.  Imagine now that the piano keys have frozen, the singer has passed away, and Valles has retreated to a cold mountain lodge to mourn.  Months pass.  He begins to dream of home.  The firewood supply is dwindling.  He wants to set out, but it may be too late.  The winter storms have come, and the wolves are venturing near the door.

The beautiful bleakness of Exposure reminds one of other icy artists, from Stilluppsteypa to Raison d’être.  Cold Meat Industry would not have seemed an unusual choice for this album.  It’s not easy to capture the sound of unending night, as it requires one to be dark, but not pitch black.  Internal dynamism is necessary to keep the listener’s attention, which Valles offers throughout the album, varying sounds within the darkness: a cowbell, a drone, a synthetic pulse.  The album often sounds like something metallic knocking against the wall of an outdoor shed.  It’s probably nothing, but do you think you should check it out?  And if there’s no wind, then why is the wind chime sounding?

Exposure is the rare fine example of forlorn music.  While it often teeters on the suspenseful, it more often inhabits the land of the foreboding.  There’s no monster out there; this isn’t The Terror.  But the ice building in the beard, the isolation, the temptation to lie down in the snow, just for a little while … this is the cold that kills, and Exposure is the hand that has dropped the glove and lacks the grip to retrieve it.  (Richard Allen)