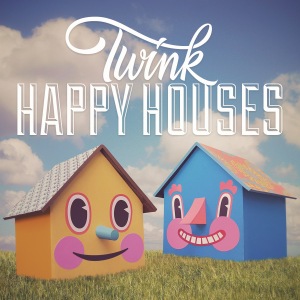 Do you like ice cream and gumdrops, Casios and candy canes, toy pianos and porcelain bunnies?  Boy, do we have an album for you!

Toytronica is not a widespread genre, which is fortunate for fans, as it’s relatively easy to compile a collection.  Psaap may have coined the term, but uses many other instruments in its repertoire.  For a short while, it seemed as if Modified Toy Orchestra would rule the roost, but a slow release pace has hampered fame.  Weerthof cooked an EP into a bar of soap and made the list.  Many other bands, from Haiku Salut to Lullatone, play toys or toy instruments.  But few go as all-out as Twink (Boston’s Mike Langlie), who collects toy instruments (especially pianos), makes toys and in his latest video, becomes a toy himself.  If this makes one think of Pee Wee’s Playhouse, it’s no accident; even Langlie suggests that Nickelodeon adopt his music, while it would be an easy fit for the Cartoon Network as well.  He describes “Frankentoy” this way: “For weirder shows only!  Mutated toys come out of hiding and start an epic playroom mosh.”

Aiding Twink on his ninth release are a few friends on bass, banjo, horns, flutes and guitar.  They make a happy racket that sounds like a toddler activating all of his toys at once: robots, xylophones, plastic push poppers.  The timbre is about as twee as it gets; it’s not for the morose.  In fact, Happy Houses is so happy that it might push someone over the edge: no ballads, no lyrics, no lullabies.  (For lullabies, try Sólrún Sumarliðadóttir’s Skýjaflétta.)  Those who don’t appreciate glockenspiel at 140 bpm should probably stay away.  But those who have toddlers, and like to dance with them, will find this a perfect playroom treat; and grown-ups who still enjoy cotton candy and chasing an ice cream truck down the street will be overjoyed.  It’s the perfect soundtrack to a Lucky Charms breakfast.

As one might expect, the album is as short as a sugar rush, but this is a wise decision; if one likes it, it can simply be played again.  Once the initial rush wears off, one begins to zero in on memorable passages: the sprightly melody of “Close to Home”, offset by faux metal; the bass and toy duet of “Interloodle”; the racetrack center of “Ostrich Hop”.  By the end, every painted house is smiling; everyone has someone to play with.  (Richard Allen)