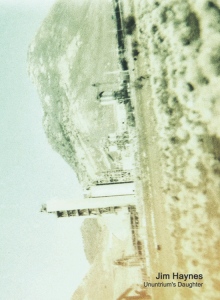 Jim Haynes calls Ununtrium’s Daughter “a very personal album, and a sad album”.  Ununtrium is an extremely unstable element that is difficult to create and may break down at any moment; to add insult to injury, there’s a strong possibility that it may be renamed.  On this album, the element is used as a metaphor.

The initial impetus was a peaceful San Francisco demonstration that turned into a riot.  After the riot, Haynes picked up a piece of splintering plate glass and took it home to examine its resonant properties.  There was nothing he could do to save the glass, so he did what he could; he saved the sound of its final throes.  Clear corollaries abound: the bittersweet sharpness of a relationship just before it breaks, the silence before the doctor shares the bad news, the peaceful hopes about to be dashed as the first brick is tossed.  In one thin moment, the march will be renamed a riot, the romance a mistake, the unsinkable ship a disaster.

One can fall in love with disaster.  Given time, one may ruminate, obsess, see beauty in the broken.  Follow this path for too long, and one may lose one’s way.  Haynes seems to have pulled back from the brink just in time.  After sampling the sounds of “a lonely, idling engine”, he visits the ocean, the world’s largest purveyor of advance and decay.  And here he encounters “an intrepid crustacean”, an example of life biting back.  What do crustaceans know of yearning, of melancholy, of dashed hopes?  Probably very little.  In this we are rare, if not unique.  And yet the tendency to anthropomorphize may be one of our most humane qualities, because it relates well to empathy.  The glass is dying, the engine is lonely.  Hope is dying like fractured glass.  Society is falling apart, yet continues on its path.  Might one be driven to despair?

This is where art comes in.  Art is a statement that things do not need to be the way they have always been.  By extrapolation, an original work of art – in this case, 45 minutes of static, sample and drone, a miasma of metal, sand and glass – becomes a declaration of belief.  To reposition sound is also to reposition thought.  One may not follow the other, but it could.  To encounter the first is to reaffirm the possibility of the second.  To the artist, Ununtrium’s Daughter is a sad album.  But if an album rescues sad sounds from oblivion, does it not then earn the opposite term?  (Richard Allen)