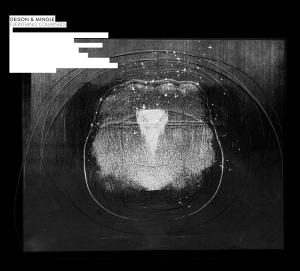 Everything Collapse[d] is billed by Aagoo as “an album of melancholy and desolation”, and it ends in failure ~ to be precise, a faithful cover of Swans’ “Failure”.  And yet, the album is intensely alive; intentional morbidity never sounded so good.

While listening, one appreciates the progression of the disc, which begins as an electronic work and descends – or one might say collapses – into a more internal work.  The track sequencing is crucial, as it underlines the artists’ intentions.

“Optokinetic reflex (Glassy Eyes)” contains a pretty piano, but it also offers intelligent programming and short bursts of drone.  At first, the tempo is kept softly, but as the bass drum takes over it turns louder, shifting from IDM to industrial.  It’s not clear who is doing what, only that the two performers have managed to integrate their sounds particularly well.  Had the album stayed in this vein, it would have been successful as a purely electronic work.  Yet this is not what Deison & Mingle have in mind; they are more interested in creating a linear sequence.  And so “Everything Collapses” removes the hard drum in favor of the soft, honoring the early instrumental excursions of haujobb; no one would mistake this for a dance track.

The album’s midsection sounds like the onset of depression, albeit a particularly active depression, a reflection of a mind in turmoil rather than in catatonia.  Tempos slow like fading energy; the drums attempt to rouse themselves while being stared down by the black dog.  Fragments replace melodies; notes become scarce.  Fallen instruments languish in a pool of lethargy.  “Settled Apathy (Hospital)” contains the clicking and humming of medical equipment, but no human noises; the bass echoes like a clarion.  It’s too much; it’s all too much.

Is there hope in the sound of birds?  Not when they are looped.  The illusion of hope is present, but only like a long-lost transmission.  The ventilator is working, but the patient is gone.

The album contains only one misstep: a “Psycho” sample in “Static Inertia”.  The snippet of dialogue (“Mother isn’t quite herself today”) fights against the album’s concept, making it seem less universal; and the quote is so well known that it steals the attention from what would otherwise be an elegant ambient finale.  “Failure” is more effective.  Tackling a Swans song is a bold move, but Deison is an artistic contemporary, and Daniele Santagiuliana does a damn good Michael Gira impersonation.  By doubling the length of the original track, the duo allows itself room for experimentation.  In the end, everything collapses, but it’s been such a lovely fall.  (Richard Allen)