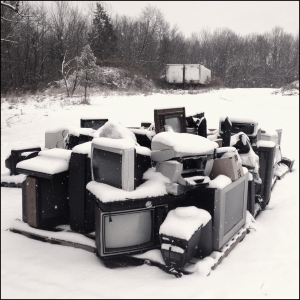 Dave Nelson and Marion Patton (Nelson Patton) have an unusual setup: Nelson plays and loops trombones, while Patton plays Moog bass pedals and drums.  A warm sound ensues, enough perhaps to melt the snow on the cover.  The larger surprise is that the sound is so accessible: catchy, fun and sugary, never more so than on the hidden Bandcamp track, “She Nasty”, which listeners will only discover once they name a price and receive their download.  This is a pretty neat surprise, an all-out jam waiting as a reward for those who take the shallow plunge.

The looping is a huge aid, in that the overlapping of trombone tones lends the release an orchestral tone.  Whenever Nelson finds a sweet riff, he captures it and allows it to rotate and repeat, much in the manner of DJ sampling.  The drums only add to this sense of a cut-and-paste; one would not be surprised to find a scratch artist in the booth someday as well.  The duo does perform live, and in exuberant fashion, as demonstrated in several impromptu YouTube videos; they clearly enjoy what they are doing.

So is it jazz?  A very good question.  Consider the structure of “Straverokee”, in which a main motif is lengthened and commented upon, seemingly by live and looped elements.  If an improvisation is looped, is it still an improvisation?  This is where Patton’s drums come in, punctuating the notes and filling the gaps with clever rolls and taps.  Perhaps the best response is that it feels like jazz, rolling and reacting; and so it is: the buoyant jazz of the early hours, when everyone is happy and nobody is drunk.  Even when the notes slow down (“Hot Sand”), the beats speed up, creating a fine balance.

The two shortest tracks are also the EP’s two potential singles.  We featured “She Nasty” on our April Singles Chart, but “Hiawassee” was a close second.  As the EP’s opening statement, “Hiawassee” is a declarative statement, a confident introduction to the duo, with a central riff echoed in deeper tones on “Homeland”.  “She Nasty” is the explosion of joy that follows an experimental mid-section, like a couple of guys unwinding after a day at work, no longer concerned with anything but letting loose.  These are the fine bookends to a creative set; the entire EP breathes joie de vive.  (Richard Allen)