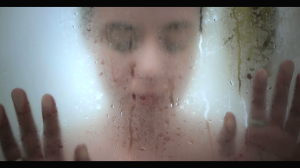 Let’s address the odd fact first:  Part III is actually part one of a short film trilogy and soundtrack, deliberately presented out of order.  These interlocking pieces are meant to create a sense of mystery, with secrets to be revealed in time.

For now, we have four tracks and seven minutes of film.  Because we’ve been warned to look for clues, we do so.  A body lies in the street, a bloody cloth over the face.  A young woman passes by, aghast, then returns home like Dido to prepare a cup of tea.  Her alienation is apparent from the fuzzy images on the TV.  The camera returns to the body; we expect a Saw moment, and are swiftly rewarded.  The body sits up; the cloth is removed.  The blood matches Celeste’s blouse. 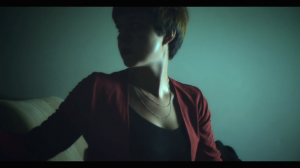 That’s just the first two minutes; it’s probably polite not to give more away.  The music is successful in creating a sense of atmospheric dread.  Thick drones rise and swirl around a dark, repeating bass line.  Given these sounds, even mundane images – a windowsill, a shower head – are laden with foreshadowing.  (Okay, the shower head is a bit obvious.)  A hiss-like double note references John Carpenter’s Halloween score.  But then in the film (no spoilers!) expectations are thwarted, including the viewer’s interpretation of time and the meaning of the title.  Warmer guitar tones emerge.  All is not what it seems. 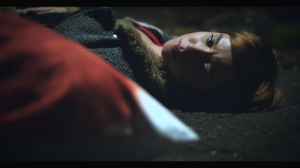 Is Celeste killer or victim?  Is the closing image literal or metaphor?  What happens next?  (In other words, what happened before?)  Dumbsaint has taken a major step forward with this project, and this powerful first entry does what it is meant to do: it makes one interested in the forthcoming installments.  One thing we hope (and suspect) will happen in subsequent entries is that the music will surge, as the score sounds like pent-up rage, begging for release.  Stay tuned!  (Richard Allen)