All manner of music is gathered together under the electronic umbrella this month, which if nothing else gives some indication to the breadth of styles that are sent through to A Closer Listen for consideration. Although I’m pretty sure one of the releases in this month’s column wasn’t actually sent to us but ended up on the list anyway. No prizes for guessing the cuckoo in the nest, it’s just for fun. (Jeremy Bye)

Anders Brørby ~ You Were There With Me 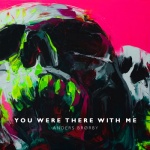 Without wishing to reveal too much of what goes on behind the curtain, here’s my basic selection process for an Electronic Observations column: make a list of records, listen to them and give them a tick if they are suitable, or an X if they’re not (i.e. they aren’t any good, or are in fact a collection of folk guitar pieces I’ve incorrectly labelled). The ones I’m not sure about get a ‘?’ and another bite at the cherry. You Were There With Me currently has three ‘?’s next to it, which perhaps is all you need to know about its unusual nature. It’s a sort of electronic collage, with a liberal peppering of samples (some more mainstream than others), with Anders Brørby adding his vocals over the top in places – and ‘over the top’ is the right phrase for his emoting on “Her Beautiful Face”. Brørby lists multiple influences behind his sound, some of which are clearer than others; Oneohtrix Point Never’s dreamy, abstract moments are certainly a key to finding your way in here. I’m still slightly baffled by this record but I do find it oddly compelling – I must do, otherwise it would just have been abandoned with an X written next to it. 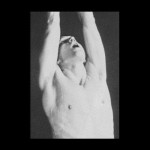 Now, this is much more straight-forward. Dark, almost lo-fi techno that reminds me of the work of Muslimgauze and the Blackest Ever Black label. The beat pounds along at an unwavering tempo, illuminated by all manner of bangs and clatters, whilst there is a hum of deep bass to power it all along. The hook lines are composed of a handful of notes and the whole EP is engulfed in a hazy atmosphere, like the hiss on the samples building up to create a whole extra level of sound. Some of the production is a little crude at times, but no less effective for all that – particularly the way the bass drops in to the opening track at around the 4:40 mark, not quite on the beat and so a source of continuing surprise. Damaskin is a new artist on a new label – I think we may see more of both on these pages before the year is out.

Another month, another duo from France – from Lille this time. Aurélien and Michel mix the spaciousness of dub with hip hop beats for an EP that’s fresh and lively, helped in part by their willingness to keep the tracks brief, with only a couple a shade over 3 minutes. In terms of musical influences Drumked draw on a wide array of beat-makers and that is to their benefit – when you think they are getting stuck in a rut of programmed rhythms, they use freer, live-sounding drums on “Fellas” and “What Does A Man Do”. However, it’s arguably their non-musical influences that drag the EP down a touch, with samples of film dialogue of gangsters and ninjas that seem more stuck in the past than the music deserves. Whether this is indicative of the dearth of memorable dialogue in contemporary cinema rather than a lack of imagination in choosing samples, I’m not sure – but it means that Drumked at times sound like their music is 20 years old rather than six months.

Eostre ~ They Were Made of White Cloth

The first track “Mission Rurale” opens like something off the Forbidden Planet soundtrack, all alien-sounding bleeps and burbles, before settling into something no less sinister; whilst the electronics chatter all around, a low, repetitive chant holds the track together. It’s a powerful and dark statement of intent and it sets the tone for the rest of They Were Made of White Cloth; whilst the electronics whirl around, there is often a voice buried in the centre of mix providing a palpable sense of disquiet. It’s a combination that works very well, and there is more than a hint of gothic influence in some of the tracks, although Eostre displays a subtlety and delicate touch that is often lacking from certain practitioners of the style; “Ostara” is all about the clanging chimes of a demented harpsichord but it transitions into an ambient coda before slipping into self-parody. It’s to Eostre’s credit that he maintains such a consistent and convincing sound world here – one you’re sucked in, there’s no getting out.

Halo ~ Song of the Highest Tower

This is the ambient interlude in the column this month; a highly atmospheric and stunningly beautiful release from the astrangelyisolatedplace label and blog. Halo is Italian Pasquale Riviezzo who has composed five pieces of delicate piano and rich ambient effects and field recordings; each track can therefore be related to a fairly specific experience (a walk in the rain, waiting at a train station) without being purely about that moment; you can invent your own stories for this music. The compositions occupy a fertile middle ground between Max Richter and Joe Hisaishi (the man behind the music for many Hayao Miyazaki movies); the temptation to start using phrases like ‘imaginary soundtrack’ is great but that’s probably only because Song of the Highest Tower is such an evocative record. It gets into this column by a whisker, because a lot of the instrumentation is acoustic, but I think it will appeal to even the most dedicated beat-head.

Jan Amit ~ Around & Above

Now this release has many tropes of ambient music about it, particularly the opening tracks, but it is clearly an electronic release; there’s electricity all over the tracks, positively crackling its way through Around & Above. It’s probably a good job this is a cassette and digital only release as you would think there were some major problems at the pressing plant if you listened to this on vinyl; there is the occasional concession to tape players though, with the ‘click’ of the eject mechanism occurring towards the end of release. The opening tracks display an inventive use of samples but are mostly beatless; it isn’t until “Spread Your Wings” that a dubby rhythm is introduced. Thereafter the album veers between crackly ambient and trip-hop; samples of Russian dialogue pop up, female vocals are chopped and sped-up – elements that could misfire badly so it’s to Jan Amit‘s credit that they don’t sound that clichéd. If there’s one negative, it’s that Around & Above could benefit from a little bit of editing; Amit tackles both genres convincingly, but squeezing them cheek by jowl onto one release may dilute some of the impact.

If the title and even the cover of Eclectic Frequencies suggest a stuffy, academic study of sine waves, then it’s a classic case of misdirection. For whilst there is a hint of noodly introspective composition about a track such as “From the Womb”, much of Lawrence Lindell‘s second album is carried along on a wave of rhythm; occasionally hip-hop inspired, but equally powered by drum & bass patterns, such as the busy “Putting Down Roots” and “We’re The Odd Ones”. There is a consistency in attitude and sound across all ten tracks though, whether the drums are centre-stage or not; the tracks are taut and tightly sequenced so there’s scarcely pause for breath between them. Lindell is stronger on feel and rhythm than melody but that’s not to say the album is lacking in any way, and he shows he can write a tune in the closing “My Peace of Mind”. If he follows this trajectory, he’s going to be much better known, very soon. 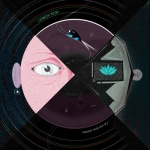 Another European duo, Lennox Row write woozy, yet poppy electronic songs. One half of the Polish pair, Row, is the vocalist but unlike a lot of synth duos he is content to let the music (of Lennox) carry the EP – thus, half of the tracks are instrumental and for the rest of the time, the vocals sit within the arrangements rather than over the top. So all credit for an ego-less vocal performance, and credit too for the music itself which is pleasantly melodic, a bit like múm but with a male singer instead. The final pairing of the ambient drift of “She Swallows the lotus” with the off-kilter pop of “Connecting ( to the station of dreams )” is particularly effective, showing the range of styles the duo embrace, and by sensibly keeping J’ai une âme solitaire down to six tracks, there’s no chance of losing interest.

After some releases that have a hint of dub about them, it’s refreshing to get to an EP that is full-on dub techno. Mech are, like Lennox Row, a duo from Poland (seriously, it’s not planned this way), and have clearly absorbed the work of their German neighbours Rhythm & Sound and Gas. The sounds are carefully layered about the steady pulse, giving the impression of constantly shifting back and forth, whilst remaining anchored to the same point – a bit like a tectonic plate although with less chance of a tsunami. Aside from moments like “Rosa” spluttering to an end, the tracks here are thrillingly consistent, with 3 of the four tracks here boasting the same running time; I’m not sure whether was an unlikely coincidence or if Mech have deemed 7 minutes 12 seconds the optimum length for a slab of dub techno – the tracks could all probably last twice as long without anybody feeling the producers were over-indulging. Good work all round.

Album number nine for the LAD, who has also been trying his hand (and vocal chords) at singing, under his own name. He’s keeping subtractiveLAD and Stephen Hummel separate for the time being, although Wilderness emphasises the point that you don’t need lyrics to make a statement, you don’t need words to convey a message. Hummel’s dug out a fleet of analogue synths to sound as natural as possible, capturing the spirit of adventure found in journeying towards the unknown and the music certainly flies, seemingly boundless in its scope. subtractiveLAD has never struggled to make an epic statement with his music, and Wilderness is indeed suitably widescreen, although not meekly following in the footsteps of the analogue synth pioneers – the drums of “Pulled by the Stars” are enough to position Wilderness as a contemporary release. This is the sound of an artist at the height of his powers and the result is an ambitious yet wholly successful album.