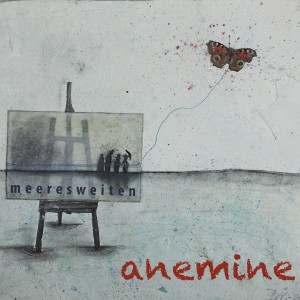 How does one react upon hearing the news that a favorite novel has inspired an album?  At first, with trepidation, the same reaction one might have toward a film version.  And then, if the project is worthy, relief, followed by gratitude.  Cologne duo Anemine was inspired by Alessandro Baricco’s Oceano Mare (Ocean Sea).  The album title (translation: SeaWidths) is a German play on words.  The 1993 novel plays with expectations of narrative and flow, imitating the sea through its prose.  The setup may be relatively simple ~ a group of unrelated characters converge at the Almayer Inn, and their mysteries are gradually revealed.  But the originality of Barrico’s characters and the elegance of his writing makes this work a modern classic.  Anemine brings the themes of the novel to life while retaining its mysterious nature.  At first, the album seems disjointed due to its many styles – but everything comes together in the end, just as it does in the novel.

15-year-old Eliswin (Elesewin in the English translation) arrives at the inn because she feels herself disappearing.  Her father asks, “You, sir, will save my daughter with the sea?”  Eliswin’s theme and reprise are languid and unassuming, seemingly disaffected, a piano-grounded suite surrounded by light electronics, like a young woman looking off to the side, pretending not to care.  But the active drums of the second part signify involvement, engagement, reappearing.  She cannot help but be present.

Ann Deveria has been unfaithful; her husband has sent her to the inn in hopes that she will forget her lover.  The reader may declare, “I know how that goes!”  But her arc is difficult to predict.  Her theme is slower, mired in thought, a mingling of guilty conscience, resignation coupled with curiosity.  The opening suggests a call to prayer, followed by the rustle of a train, but the fullness of the instrumental choruses suggest blooming, adventure, love.

The irascible painter Plasson cannot finish a sentence, or so it seems, a painting.  Using ocean water and waves of white, he completes canvas after canvas, with little mark to distinguish one from another save the descriptions.  As suits his fanciful personality, his theme is akin to a seaside carnival: a diversion, a holiday, a wink.  Bonus track “White Series 256” continues the sleight of hand with deep bass and percussion, like the colors hidden in the painter’s mind.

How to write about Adams and multiple tracks that bear his imprint?  First there is the pulse.  First is the pulse, second the cloud, third the threat of rain, fourth the insistent beat, fifth the bells, and now only the reader knows why they toll, and the reader has been struck mute.  Sixth the memory, seventh the telling, and all is now lost, it was lost before, but now spoken, it is realized.  Eighth the sense that this has happened before, ninth the sense that it is still happening, that this bassline has lulled us into a false sense of security, we heard it first in the opening track, we are still at the Almayer with Anemine, we are not home, we are never home, there never was a home, and now ten, a lilt, a consolation, a shred of flag, and last, the sea, the sea, the sea.